Sibylla always wanted adventure, but she didn't know it would come in the form of a giant, magical bull. Is he a man or a monster? And who knew a prophecy could be so literal?

The first title in a new series co-created by sibling writer/artist team CAT SEATON and KIT SEATON, begins the adventure of a lifetime. 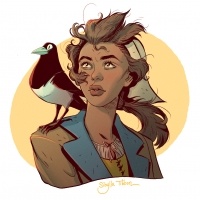 Norroway is a retelling of the Scottish folktale, The Black Bull of Norroway, and it's thoroughly entrancing. This series has changed a few details and expanded the story, but you can read the original here.

The book opens with three girls visiting the local "witch" to have their fortunes told. The first two ask whom they will marry and are given satisfactory answers. The third is not eager to know this answer, but the first two convince her to ask, so she does. The answer? She will marry the Black Bull of Norroway. Yes, a literal black bull.

Legend has it that the Black Bull of Norroway is the Black Knight, transformed into a bull because he disobeyed his father, the king. It isn't a legend, and the bull comes to collect the girl, Sibylla, when she is  grown. The two set off on a journey, encountering the bull's brother and then his sister, plus mysteries and magic and a bunch of things that are not as they seem. (This is a hard story to summarize without giving away the plot, sorry.)

So why did I enjoy this book so much?

In summary, I adored this comic. I can't wait to see how these two anti-heroes get together and save the Bull and his family from the curse.