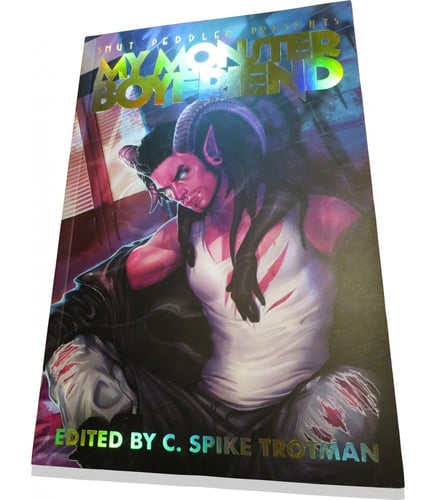 The review below was originally posted at Heroes & Heartbreakers in March, 2017. The content is no longer available there, so we're reposting it here! I hope you enjoy the monster-sex shenanigans.

Last time, on Smut Peddler Presents… *cue swirly flashback screen* We talked about an anthology of dirty comics made by a whole mess of talented ladies!

This week, we’ll catch up with the ladies (and some new ones!) as they launch a brand-new anthology of dirty comics called Smut Peddler Presents: My Monster Boyfriend. In a special encore, we’ll also going to give a couple of paragraphs to Yes, Roya, a comic first made available when Iron Circus Comics was Kickstarting this anthology.

Is that not the cover of every paranormal romance novel ever? Pouty lips, glowing eyes, ripped shirt… giant horns, pointy ears…  Let’s be honest, I bought this book for the cover. Good marketing, Iron Circus Comics.

I bought this in PDF and read on my iPad, since it’s in full color and some of the artwork simply needs a bigger screen. I really valued being able to zoom in on some of the panels because the artwork is quite lovely.

AND HOW. I knew what I was signing up for and was still making some confused faces and bewildered noises during some of the stories. Like, this is a lizard dragon mountain guardian…. what is going on? Actual words I uttered while reading what turned out to be one of my favorite stories in the whole bunch. The most fascinating part of the whole experience was indeed that I was bewildered but still had a great time reading. I didn’t know where the stories were going and that was okay. As it turns out, being surprised and confused can be fun! In comics-reading, at least.

Let’s highlight a few of these fabulous, weird, sexy stories!

Lonesome Palace by B. Sabo and Leia Weathington

A beautifully illustrated story about a man injured on a mountain, discovered and healed by the mountain’s dragon-ish guardian and eventually romanced by said dragon. This is one of the longer stories in the volume, and at several points I found myself surprised by the direction the story had taken. The central characters are more nuanced than I originally expected and what they find together is beautiful in more than one sense.

If you like some funny with your sexy, this is the one for you. A vampire finds himself accosted by a girl with a monster-kink. He thinks he’s going to have a nice dinner when he finds her walking alone and night and well… hijinks ensue. Since it was illustrated by Trudy Cooper of Oglaf fame (Oglaf is a hilarious dirty webcomic with a traditional fantasy motif), I was probably bound to like it, but the story is short and funny and possible the least “weird” of the bunch.

Perfect for this time of year, if you live in the Frozen North as I do. Thirsty Work is the tale of two men who find themselves trapped in a cabin by an avalanche. Of course, one turns out not to be a human man and is actually one of the mythical creatures that the human man has come to the woods to write about in the first place. Forced proximity leads to discovery and sexy times. Because hey, why not?

This one actually made me cry a bit. The heroine’s love goes to war and is killed. She avenges him and they are mystically reunited. The art is stunning and works with the story to evoke resonant emotions. (I really liked this one and made my husband read out of order so we could discuss.)

My Monster Boyfriend was fun and I think you should read it! If you like paranormal romance, erotica, or some combination, you’ll find something to enjoy.

From the sale page:

Wylie Kogan is an aspiring artist, stumping for work in 1963 California. When a fawning fan letter grants him access to his cartoonist hero, the wealthy and celebrated Joseph Ahlstrom, he's quick to take advantage of a proffered portfolio review . . . but winds up learning more than he ever wanted to about Joe when he stumbles across some of his idol's illicit fetish art.

His hasty, ill-considered theft of a drawing triggers a series of events he never planned on . . . most of which involve Joseph's imposing and resolute partner, Roya.

The blurb pretty much covers it. This is exactly what you’d expect and it’s GREAT. Roya has more fun than anyone, I think. Be Roya and enjoy having two men at your mercy. Be Roya and be hot as hell, be in control, and break down barriers left and right. If you’ve balked at the $15 price tag for either of the other books I’ve recommended, this one is 146 pages and $8.00 in PDF. And worth it.