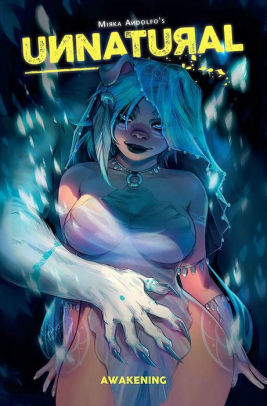 Leslie J. Blair is a simple pig girl, she loves sushi and she is trapped in a job that she hates. She lives with Trish, her best friend. In her world, which is full of anthropomorphic creatures, with a totalitarian government that interferes in the personal lives of its citizens, up to the point of allowing only relationships between individuals of the same race. The transgressors are punished. They are accused of being... unnatural!

Leslie dreams of something different for herself. But these dreams are becoming dangerous, especially because they feature a mysterious wolf. And, when she wakes up, she thinks that she is being watched... And, as if that were not enough, on the day of her twenty-fifth birthday, Leslie receive an email that she would never have wanted to receive.
But she still does not know it's just the beginning...

The hit Italian comic, a fantasy, erotica, romantic suspense series by MIRKA ANDOLFO (Wonder Woman, Harley Quinn, DC Comics Bombshells) will bring you in a colorful but terrible world, where personal freedoms are superfluous. Follow Leslie on a breathtaking plot, between thriller and fantasy with a touch of sensuality.

The book opens with Leslie, a humanoid pig, making out with her pillow while dreaming about having sexytimes with a mysterious white wolf. Then her roommate, a mouse named Trish, wakes her up and makes her go to work. As the story progresses, we learn about the Reproduction Program, a government initiative set up to match people of the same species/race for marriage and procreation. Interspecies relationships are against the law and "unnatural," thus the title of the series.

As you might expect, there's a fair amount of social commentary, but it works given the context. Leslie's best friends are Trish and Derek, a gay goat. Derek's actually in a relationship with a pig, so he's asked Leslie to consider marrying his boyfriend to avoid the law. People who remain single are forced to pay really high taxes, while those who get married are rewarded, in addition to harsh punishments for anyone engaging in an extraspecies relationship. I was expecting to see something like Charlaine Harris's True Blood series, wherein vampires are "coming out of the coffin," but this series is focused more on race/miscegenation than homosexuality. It's all complicated of course, by the fact that different species can't reproduce together, so it's a mashup of both racist and homophobic issues.

Anyway, back to the plot. Leslie turns 25, which is the age the government has set as the cutoff for letting you try to find your own mate. They set her up with a pig who seems nice... and then everything goes to hell. I can't go further in the plot without giving some major spoilers, but I can tell you that there's magic and dreams that might be memories, plus murders and a kidnapping.

The art is beautiful, with lots of color and thoughtful detail. (See left)

As for the sexiness, Leslie is drawn like a goth pinup and there are a lot of boobs. It's drawn by a woman, so I didn't get a strong cheesecake vibe, but it's definitely a sexy comic. There isn't on-page sex, however, but dreams and some sexual harassment at her workplace. (Her boss is such a slimeball.) There are, however, multiple murders and Leslie is drugged before her kidnapping. In all, I gave this an R rating.

I read this twice, because there's a lot going on that makes sense once you get some of the missing pieces revealed in issue 4, but I'd also really like to talk to other people once you read it. I have theories!