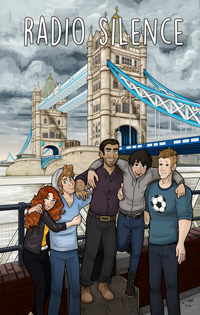 Hitting the road on a journey of self discovery and acceptance, this coming-of-age tale gives a backstage look at friendships and the plights of fame as experienced by a modern British rock band.

On the fast track toward fame, the five members of the fictional British rock band, Radio Silence, enter into an exciting new life on the road with their best friends. As they tour across the United Kingdom, they excitedly embrace this new lifestyle and all the resulting challenges, including living in close quarters with each other with little privacy, and the overwhelming reaction of the public to their new-found success.

This comic explores mature themes, such as domestic abuse, self harm, sexism, sexuality, neglect, and life threatening medical conditions. It will also contain swearing and the occasional sexual themes, albeit avoiding being explicit.