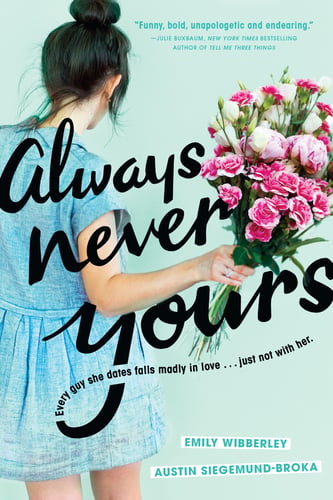 Review: Always Never Yours, by Emily Wibberley and Austin Siegemund-Broka

I would be lying if I said that reviewing Always Never Yours was easy to do. First, I enjoyed it and especially the actual romance. Second, I loved that Megan is mostly happy with who she is (extroverted, open to romance, unapologetic about her number of ex-boyfriends, opinionated). Third, the romance had me anxious in the best way. With all of that, there are some things I’m not sure I’m comfortable with.

Megan, our heroine, is unabashed when it comes to living her life the way she wants. While she is surrounded by people who judge her for the number of boyfriends she has had, that never seems to get to her. The fact that she is boy-crazy is just something she is and those around her know it. Only, while those around her get that aspect, they also judge her, not quite to the point of slutshaming, but the line felt very shaky for me. Her parents tease her about it, and for murky reasons, this made me uneasy. Her friends sometimes seem as if the fact that she has had seven boyfriends makes her unknowable.

My biggest issue with the book is that Owen almost plays therapist for Megan at a few points. He’s writing a play essentially about a girl like her (the girl the guy is with before he meets the love of his life) and seems to use that as a means to psychoanalyze her. Instead of helping her find out truths about herself, he tells her. And then, as if she needs to fulfill what he has said about her, she goes and chases a boy she thinks is hot before he can fall into a relationship with another. Instead of the developing relationship with Owen revealing something about herself, she lets him just tell her who she is. Rewind to the part where Megan is unapologetic about who she is and knows who she is; then, we get Owen, who is quiet and lovely, telling her why she behaves somewhat recklessly. This is the point I keep getting caught on. This is where I cannot say that I loved the book because there’s something uncomfortable about the dynamic. They don’t discover things about themselves through being together, Megan is told why she is a way by her love interest and by the end comes to the same conclusion.

Don’t think that I didn’t like Owen. I adored Owen and how he does actually see and like Megan for who she is. And I love a good slow burn (which this book is as Megan spends a notable amount of time chasing someone other than Owen). The romance is something that builds in a natural way until finally they try to tear your heart apart. It’s just that maybe the guy who loves her shouldn’t be writing a play about her. I don’t know, maybe that’s just me. [Editor's Note: Megan knows about the play and is helping Owen with it. The play is about Rosalind, a character referenced in Romeo & Juliet (the play Megan and Owen are acting in) but who never appears on the stage. Connections are made between Megan and Rosalind, young women who are the "before the real romance" love interests.]

So, how do you rate a book that you really enjoyed, but that also made you uneasy at times? If you have answers, I’m ready to listen.

Margrethe listened to the audiobook on Hoopla.