Is there a better time of year for novellas and short stories? This round of mini-reviews is a exercise in clear-the-TBR, with a forced proximity (snowed-in!) collection, a dirty m/m novelette, a m/f Little Mermaid retelling and a sweet f/f mermaid story. 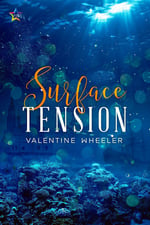 Surface Tension starts out with some Little Mermaid vibes, with a sailor (a woman in disguise as a man) going overboard her ship during a storm. A mermaid saves her, but she doesn't realize that until much later, as merfolk have a way of wiping clean the memory of humans the humans they "experiment" on. Our human heroine wakes up on the beach with no memory of the last week, and sets out to find a job on land.  After weeks of failing, she ends up back at the ocean, meets the mermaid again, and is held captive under the sea for a long while. This is where the star-crossed-lovers plot takes hold, with the mermaid Ydri trying to be kind but also not get in trouble, and the human Sarai trying to escape but also being aware that she'll drown immediately without Ydri's magic.

The story ends with the two of them together, but it's not exactly what you might expect. If you're looking for a Little Mermaid retelling, this might not do the job for you, but it is very sweet and there's no sex, if that's something you're looking for. 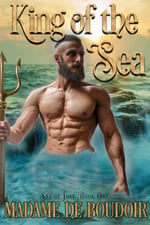 King of the Sea, by Madame de Boudoir
Suzanne says: Read it Eventually

In contrast to the previous book, this is a steamy retelling of The Little Mermaid in which Triton gets angry when his daughter tells him she wants to be human to be with her prince. After ruining her grotto, he heads up to the surface, intent on finding the prince. Instead, he finds a young woman angrily drinking and dancing on the beach, having been summarily dismissed from the chorus line at Monte Carlo without being allowed on stage.

If you've ever fantasized about Triton's beard and biceps, or wondered how mermen have sex... this is the novella for you. 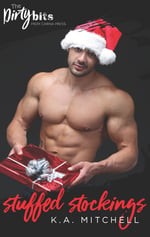 This is part of Carina's Dirty Bits line, so it's a short, sex-centered story. And *phew,* if you ever wondered how accountants and office Secret Santa could be sexy? This is the book for you. There's a fair amount of kink, but as sexy as it is, the romance between the two heroes is really sweet. The book is also funny, which is something I really needed as I read it on Christmas Eve. Possibly the best that I've read so far in the Dirty Bits line.

Here's what you need to know about this anthology:

- It's long, coming in at nearly 800 pages. Very good value for your $ if you like any/all of these authors.

- The stories are all forced proximity romance, with many being some sort of "snowed in at Christmas."

- Heat ranges from moderate to panties on fire.

- If you like any of these authors, the anthology is worth buying. I'm not sure if they'll be re-released separately later, but I assume so.

CW: a number of CWs for microaggressions

Suzanne received a copy of this book from the authors for review.