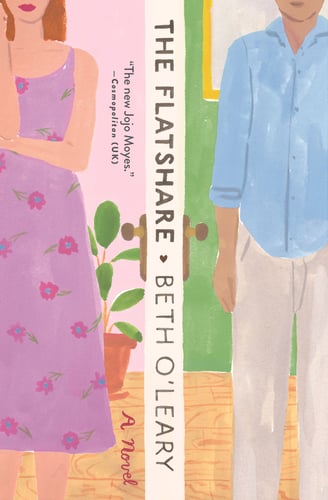 What if your roommate is your soul mate? A joyful, quirky romantic comedy, Beth O'Leary's The Flatshare is a feel-good novel about finding love in the most unexpected of ways.

After a bad breakup, Tiffy Moore needs a place to live. Fast. And cheap. But the apartments in her budget have her wondering if astonishingly colored mold on the walls counts as art.

Desperation makes her open minded, so she answers an ad for a flatshare. Leon, a night shift worker, will take the apartment during the day, and Tiffy can have it nights and weekends. He’ll only ever be there when she’s at the office. In fact, they’ll never even have to meet.

Tiffy and Leon start writing each other notes – first about what day is garbage day, and politely establishing what leftovers are up for grabs, and the evergreen question of whether the toilet seat should stay up or down. Even though they are opposites, they soon become friends. And then maybe more.

But falling in love with your roommate is probably a terrible idea…especially if you've never met.

Review: The Flatshare, by Beth O'Leary

The Flatshare is a charming romance that happens to be part of the new crop of romance novels being packaged as women's fiction. On the cover, O'Leary is referred to as "the new Jojo Moyes," but if you've read both, you won't think that. No one dies at the end, for example. It's closed door, like Moyes, so maybe that's what they were thinking?

Tiffy is a white editor of books on crafting and biracial Leon works nights at a palliative care hospice. Tiffy's emotional abusive and controlling ex has left her for another woman and gotten engaged. Their relationship is such that he's been "allowing" her to continue to live in his apartment while he lives with the new fiancee. (We find out later that this is part of the control aspect.) Except now he wants full rent - and back-rent. Tiffy needs to move somewhere cheaper and fast.

Leon's brother is in prison for an armed-robbery he didn't commit and Leon needs money to pay their incompetent lawyer for the appeal. Richie, a sweet burly mixed-race man with tats seems to be a victim of racial profiling and a frame job by the actual culprits (a gang). So they enter an unusual arrangement: they'll share a flat, including the bed, but they're never there at the same time. Kay meets Tiffy to show her around the apartment, and Leon and Tiffy only get to know each other through notes they leave around the apartment.

About halfway through the book, they finally meet face-to-face and it's very funny. Leon and Kay have been broken up for a while, and Tiffy has started to remember all the sh*t her ex Justin did to her. While I'm reluctant to diagnose her, I believe it's PTSD and she does see a therapist. Leon, however, is a caretaker hero. He's so so lovely. He instinctively leaves the room so Tiffy can call her friends (without her asking), he brings her a blanket and a cup of tea when she's having a bad time of it, and the bleak moment is understandable given his own history. Tiffy is a heroine to cheer for. I wanted her to fight Justin and get her HEA, which she does. *cheer*

There's also a subplot with an elderly man searching for the man he fell in love with during the war. It's sweet and sappy and I loved it.

All in all, I adored this novel. Leon's POV is a bit difficult to get used to, as he thinks without pronouns or articles. It's  weird, but he'll say things like "Go to bedroom. Find red jumper. Put on and face day like adult person." Otherwise it's a lovely love story and I'm looking forward to whatever O'Leary writes next.

Content Warnings: emotional abuse, stalking, scene where abuser is at the apartment trying to break in, imprisonment of an innocent man, character has a mother who was abused