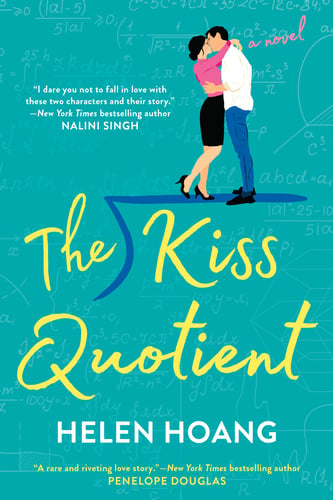 A heartwarming and refreshing debut novel that proves one thing: there's not enough data in the world to predict what will make your heart tick.

Stella Lane thinks math is the only thing that unites the universe. She comes up with algorithms to predict customer purchases--a job that has given her more money than she knows what to do with, and way less experience in the dating department than the average thirty-year-old.

It doesn't help that Stella has Asperger's and French kissing reminds her of a shark getting its teeth cleaned by pilot fish. Her conclusion: she needs lots of practice--with a professional. Which is why she hires escort Michael Phan. The Vietnamese and Swedish stunner can't afford to turn down Stella's offer, and agrees to help her check off all the boxes on her lesson plan--from foreplay to more-than-missionary position...

Before long, Stella not only learns to appreciate his kisses, but crave all of the other things he's making her feel. Their no-nonsense partnership starts making a strange kind of sense. And the pattern that emerges will convince Stella that love is the best kind of logic...

Content Warnings - Questionable consent during sex, parental abandonment, depicts sex work and autism as shameful
There were some lovely things in The Kiss Quotient:
The way Hoang writes Michael's family; using their Vietnamese language, culture and food as a meeting point.
Stella's passion for econometrics, which she is excellent at and generous with.
And Michael's cousin, Quan, is a wonderful secondary character that I want an entire book about.

At the beginning, I was excited by the way Stella's experience of the world was written. I enjoyed that I could relate to her observations. But it slowly became apparent that the autism in The Kiss Quotient is simplistic and one-dimensional. Books don't need to be positive representation or a place to educate the reader, but I do think a book that's sold itself so boldly as an ownvoices book about a woman with Asperger's should have used its voice responsibly.

The story of The Kiss Quotient relies on the inherent belief that Autism is a weakness, a flaw, something to be ashamed of, something to be overcome. It made me feel uncomfortable, frustrated, and honestly... impatient for it to be over.

Besides that, the storyline often doesn't make sense. The premise of the book comes crashing down before it really begins: Michael and Stella's first night together is less "Ooh baby let me show you all my sexy sex tricks" and more "Oh damn, this woman's sex life so far has been severely traumatizing." Stella wasn't missing out on enjoying sex because of her autism; she was going on bad dates with horrible guys ending in terrible sex that she internalized and blamed herself for.

And then 30% into the book, Stella realizes that she can figure out sex with the right person (read: someone who treated her with basic human decency), so she makes a new plan: No more sex lessons. She just wants Michael to teach her how to be in a relationship. And then the rest of the book is just a fake relationship between two people who feel unworthy of each other because of their: autism, sex work, lack of fancy degrees, parent's criminal past, or because apparently making alterations at a tailor shop is not a respectable job. They find in each other a patience and interest in their passions that they never thought they'd find in someone else. This makes them feel like "Oh, fantastic, I can find someone to love me!" but it never addresses the fact that they have nothing to be ashamed of in the first place.

The story is told from both Stella and Michael's POV, and I really struggled to see Michael as a worthy love interest. From Michael's POV, Stella is depicted as a fulfillment of a fantasy, a porn-theme come to life. His actions read as strangely manipulative; it feels as if he's taking advantage of Stella's naivety and willingness to learn. He says all the right things about doing only what Stella is comfortable with, but then when they're in bed he's overruling all her initial plans and disregarding her opinions. Stella repeatedly reminds us of what she doesn't like, and she voices it to Michael. He hears her, sees her reaction, but tells Stella that she doesn't know what she likes. It's a lot of Michael convincing Stella she'll actually like it if he just does it one more time. Then when he does it again, she suddenly she likes it! --It feels so unnecessary and dangerous that Hoang created this situation to reward toxic behaviour and frame it as Love.

When I considered why Stella's character felt inauthentic and undeveloped for me, I began to question some practical things: Though she's insecure about her interactions, Stella has good conversations and engages well with people. But she has no mention of friends or even acquaintances. What did she do during her college years, or when she started at her job, or when she moved into her apartment? Why is her life so isolated?

When learning modifications for life with autism, you learn to build a trustworthy support system to confirm things like your judgment of someone else's tone or intention. In The Kiss Quotient, Stella is 30 and successful, but repeatedly making big life changes based on her most recent online findings. I just don't find it believable. In the Author's Note, Hoang says that she started therapy when she was diagnosed with Autism. Why is that not a part of Stella's life? Has she met other women with Autism? Who instilled this deep sense of insecurity about her Asperger's diagnosis? It's never addressed, so we're lead to believe this shame is totally suitable behavior.

Also in the Author's Note, Hoang explains the freedom she found when deciding to write a character with Autism, saying "Sometimes instead of confining you, a label can set you free." I found this comment particularly frustrating because The Kiss Quotient's heroine is confined by her diagnosis all the way through the book. There are some brief moments where it's clear the intention was to "free" Stella from the autistic traits she thinks of as burdens, but they are even more troubling for me.

She makes comments about overcoming them, or choosing not to give into them, consistently "forgetting" her routines when she's with Michael. Stella lets Michael see the parts of her that are different, and clearly states what she needs to accommodate for them, but she keeps the reason for it a secret. She believes that if she told Michael, "she'd become the girl with autism. She'd be... less." I'm fine with a character feeling that way about themselves if it makes sense; real life is complicated and humans are messy. But if you're gonna give me an HEA can you at least attempt to address or resolve the many loose-ended destructive comments about the disorder your heroine is living with? Or are you telling me the fact that she has a boyfriend now is the happy ending, and none of the insecurity of the label that is the premise of the story is relevant to her joy and wholeness as a person?

The Kiss Quotient felt like an ill-informed use of the Romance space to reinforce several stereotypes. I don't need the joy of seeing myself represented on a page if it comes at the price of a character that remains deeply ashamed to be the way I am. And I want a story of a woman discovering enjoyable sex, but not if it comes with the undercurrent of the hero forcing his own fantasies and desires onto her. It's 2018. We deserve better.

Two books that I would recommend instead:

For a hero with autism who falls in love and really lives and is totally badass and never ashamed of his neorodivergence: Carry The Ocean by Heidi Cullinan.

For a captivating I-hired-an-escort-and-paid-for-this-sex-every-friday-but-now-we're-falling-in-actual-feelings-aaah story that turns out suuuper romantic: Professional Distance by Silvia Violet