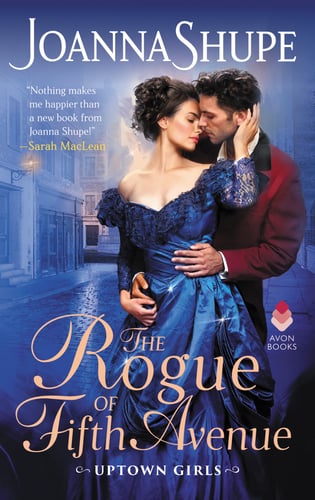 Review: The Rogue of Fifth Avenue, by Joanna Shupe

Let me begin by saying that The Rogue of Fifth Avenue was my very first Joanna Shupe and it definitely won’t be my last. I already have the next book ready to go and have pre-ordered the final book in the series.

Sometimes, it’s difficult for me to get super into historical romances. It takes a certain amount of effort and mental energy to go back several hundred years in time and still lose myself in a book. I have a very few historical romance authors who are a must buy but beyond those names, I usually give the genre a wide berth.

I am so happy I picked this book up. First of all, it’s set in New York City in 1891, or what’s commonly referred to as the Gilded Age. Most of the historical romances I’ve read tend to take place in England or Scotland and usually involve rakish Dukes and shy wallflowers and while that’s all well and good, it can sometimes get a little repetitive. One of the things I loved about this book was the setting and time period. It really made the book feel fresh and new in a way that’s sometimes very hard to do in this genre.

I also adored the two main characters. Marion “Mamie” Greene is a well-to-do society princess but instead of spending her days lounging about and eating bonbons, she’s a do gooder with a strong moral compass and real Robin Hood streak. In fact, the opening scene takes place when the hero, Frank Tripp, a high society lawyer for the wealthy, spies her at a casino, one where women are typically not allowed, picking the pockets of other wealthy gamblers. The connection between Mamie and Frank is indisputable and their motivations and backstories are compelling.

However, I did have one issue with this book. Mamie and Frank become lovers while Mamie is desperately trying to figure out how to get out of marrying the man her father has chosen for her. She dreams of having autonomy over her own life and choosing her own life path. However, every time Frank and Mamie make love, they don’t use any protection and right afterwards, Frank has an internal monologue where he wonders if he might have impregnated Mamie and how he has always been so careful to pull out but with Mamie, he has no self-control. I find it very strange that Mamie, a feminist who is very much about social change and is quite aware of the practicalities of real life, would not ever question this and that these two very intelligent people would never have so much as a conversation about the possibility of Frank getting Mamie pregnant. When they make love for the first time, Mamie actually makes a point of mentioning that she’s “leaking”, which, in my opinion would have been the ideal moment to have such a conversation but the topic is never broached, then, or in future scenes when the two make love.

Regardless of this one issue, I did very much enjoy the book, the main characters and side characters were incredibly memorable and I’m already looking forward to the next book in the series.