I’ve been a collection development librarian long enough to tell you that publishing in December is traditionally a dead zone.  You’d think that would have changed somewhat with the mainstreaming of self-publishing, but not really. Things still seem to bunch up around the fall and spring months of the calendar.  But I can always count on my old friend Harlequin Historical and there’s two westerns this month that are prodding me to take a closer look.

When Lady Alexandra Mannerly last saw Malcolm Gordston, he was a poor crofter’s son—someone a sheltered duke’s daughter would never be allowed to marry. But scandal has rocked her arrogant family, and Alex now leads a quiet life as a governess in Paris—where she meets Malcolm again! Now he’s a wealthy, powerful department store owner…and determined to make her his bride!

Sometimes I legit wonder if authors have a window into my soul because OMG WHY AM I NOT READING THIS BOOK RIGHT THIS SECOND?!  A heroine now living a life below the privilege she was born into, and a hero who is a department store owner. Oh, and it’s a marriage of convenience story!  Happy holidays to me!!!! 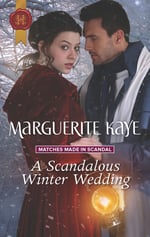 From one snowy Christmas…

…to a sizzling-hot reunion!

A Matches Made in Scandal story. Kirstin Blair has spent seven years trying to forget brooding Cameron Dunbar. Now self-made man Cameron needs her help to recover his missing niece, and Kirstin must face the truth—seeing him again sparks the same irresistible attraction that first brought them together! She must decide: resist, or give in to temptation and risk Cameron discovering everything she’s fought so hard to protect…

This is the fourth and final book in Kaye’s Matches Made in Scandal series and it’s time for the mysterious Procurer (a Regency era “fixer”) to get her romance!  This one features a reunited lovers theme, and a bit of a mystery, as the heroine is helping the hero track down his missing half-sister. I’m behind on this series, but I’ve found The Procurer so intriguing just from brief glimpses, I’m half tempted to jump ahead and read out of order.  I’ve seen reviews indicting this stands alone, so I just might throw caution to the wind! 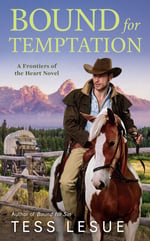 Bound for Temptation, by Tess LeSue

Having survived the Oregon Trail, Emma Palmer is ready for a fresh start, even if it costs her all the gold in California.

Emma Palmer has had many jobs and has gone by even more names, but most recently she is known as Seline, madam of her own establishment. Her place is clean, her booze is cheap and her bedrooms are fancy. But when a would-be patron won’t take no for an answer, she is forced to don a new disguise and flee for her life. While the schemes she cooks up might seem outrageous to an outsider, they haven’t failed her yet.

Tom Slater is a taciturn cattleman at the tail end of a long, hard season on the trail. He’s looking forward to a quiet winter at his old family homestead in Mexico. What he doesn’t plan on is escorting a group of women on the run to safety south of the border. Tom doesn’t need to be a trailsman to know that the woman with the sly, green eyes—the one he can’t keep out of his thoughts—will only lead to trouble.

The third in a series, this book is prodding me to check out the first book currently languishing in my TBR.  I love historical westerns but I’m not a “funny ha-ha” sort of reader by nature and reviews for book one indicated it was of the light, humorous variety (I like my historical westerns to run toward dark, angsty, are we going to survive winter?).  But the heroine is described as a madam and frankly that means I at least need to download the sample to take a look. 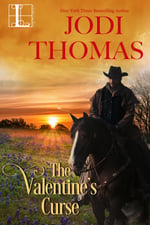 The Valentine's Curse, by Jodi Thomas

As a Yankee in Texas two years after the Civil War, cowboy Broderick Monroe is given the jobs no one else wants to do—including keeping company with the cursed Widow Allen at the annual Valentine’s Day dance thrown by his boss’s wife.

After losing two husbands to the war, Valerie Allen has become a local pariah. Rumor has it that if a man touches her, he’ll be dead by morning. But Brody believes in curses about as much as he believes in love.

One secret embrace in the moonlight leads Valerie to think she has found a kindred spirit, but fate—and the curse—aren’t done with her yet . . .

This novella was originally published in the multi-author Be My Texas Valentine anthology in 2012 and is now available separately for the first time.  It sounds positively delightful and nearly every review for the anthology singled out this Thomas story as the true gem in the collection.  I nearly broke a nail one-clicking this.