February: the shortest month of the year that always feels like the longest because hot takes on the romance genre - AMIRITE Y’ALL?!  I’ve been neck deep in contest judging which has meant less time online (and aggravated), but that doesn’t mean I haven’t been scouring around for unusual historicals.  Wild horses couldn’t keep me away from that. Here’s what looks enticing for February: 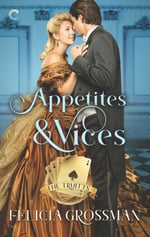 Carina publishes a historical romance once every six months (yes, this is me being snotty about it…) and frankly that’s enough for me to beg everyone to one-click the heck out of Grossman’s debut.  But it’s also a fake engagement trope (squee!) between two messy characters set in 1840s Philadelphia. If I can’t convince you, go read Margrethe’s recent review.

An Unconditional Freedom, by Alyssa Cole

Cole continues her Loyal League series with a romance between a haunted man and a heroine working as a double agent to protect her family.  I loved the high stakes conflict in An Extraordinary Union and really need to read A Hope Divided so I can catch up on this series!

The Songbird and the Spy, by J'nell Ciesielski

Pick Up a Copy: Amazon (and in Kindle Unlimited)

As shells explode over Nazi-occupied France, American music student Claire Baudin is trapped behind enemy lines, struggling to protect her identity. Singing as a barmaid while she plans her escape, a handsome Third Reich captain threatens everything she knows to be true about the enemy.

Nazi Captain Michael Reiner isn't who he claims to be. A British language expert turned spy, he discovers the truth about Claire, but he knows the importance of a secret. Struggling to resist his attraction to the songbird, he's determined to complete his assignment, no matter the cost. His cover is threatened when a ruthless female Gestapo officer arrives, hunting Resistance fighters. The raid forces Michael's hand: complete the mission or save Claire.

As the war threatens to tear them apart, they must rely on each other for survival. Is there hope—and a future—for an American songbird and a British spy?

A British spy hero posing as a Nazi officer and an American heroine stuck behind enemy lines.  I stumbled across a glowing Publisher’s Weekly review at work and that was enough to entice me to preorder this baby.  Note: the Amazon blurb indicates this is light on s-e-x and “may also contain content of an inspirational nature.” 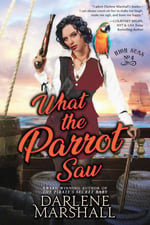 What the Parrot Saw, by Darlene Marshall

Hijacking an Englishman from a brothel is all in a day’s work for Captain Mattie St. Armand. She needs protective coloration, and a naïve (and expendable) white man will keep the eyes of the authorities off her as she smuggles slaves from the Florida Territory to freedom in the Bahamas.

Oliver Woodruff wanted a spot of travel in the Caribbean before he settled down, but he never expected “Marauding Mattie.” He’ll help her, but he knows there’s no place in his world for the bastard daughter of a pirate and a freedwoman.

As Mattie trains him for their ruse, she comes to realize he’s a man she can turn to for support and companionship, and Oliver grows to love the commanding and daring woman who refuses to fit society’s mold… but both are sure their relationship is doomed by society’s taboos.

It will take danger and adventure (and Roscoe the parrot) to convince them that the passion between them is more than an island fantasy.

Two words: Lady. Pirate.  Also, I feel like I have to give any book a shot that has “a naïve (and expendable) white man” written right in the back cover blurb.