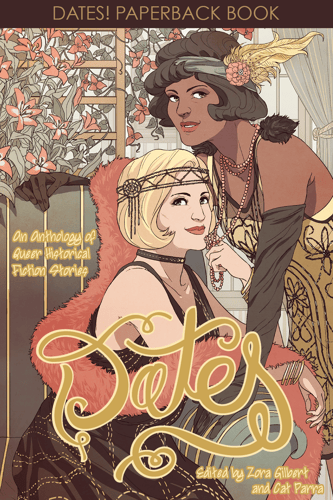 Now that the Kickstarter is over and Vol. 1 has gone to print again, you can pick up Volume 1 and 2 in both print and digital. Buy 'em all here!

Dates is an anthology of queer historical fiction comics, Kickstarted in September and October of 2015 and published by Margins Publishing in February of 2016. When we started work on Dates, we wanted to create a book that showcases queer characters and experiences throughout the ages without being constrained by what a lot of media might have us believe is “historically accurate.” Since so much of historical fiction only features queer characters in the context of tragedy–if they appear at all–we were desperate for more stories. Stories that better represented the diversity of our experiences, in all the times and places that we’ve existed. Dates is a book that doesn’t rewrite history, but instead reframes it so that the spotlight is on people who are all too often ignored.In the first volume of Dates, we had three rules:

Though our length requirement has changed, rules 1 and 3 are as central to Dates as they were when we launched the first book.

(Dates 2 is now through the Kickstarter process, you can see the campaign here.)

Review based on Dates 1:

Cravats. Latin. Rope-walking. Androgyny. Pirates. Girls in gowns running away together. Boys and boys and girls and girls and people who don't identify any particular way... This book is hard to review because not only is it an anthology, the stories within span thousands of years of history, continents, empires, cultures... it's impossible to pin down. This is a good thing if you want short, sweet stories of love and adventure.

As with any anthology, if you're looking for a longer, cohesive narrative, this isn't the book for you. If you want something you can pick up and read for a bit? It's perfect. With 25 tales, the art and plots are as diverse as you'd expect. You won't love every piece, but I think you'd have to be a true curmudgeon not to find a few you like. As for queer rep? Lots of relationships and orientations are represented, and some of the characters are never "defined," which is as it should be.

Short review because the title says it all: Dates is an anthology of queer historical fiction. If that sounds like something you'd like, you should pick this up.

The title says it all. You can now buy two volumes of this project, which features fictional queer people throughout history and all around the world.