If you've been following along, you know that we've been working to make a home for coverage of comics for kids. For several reasons, this can't be that home.

Today we're excited to announce our newsletter! You can also find us over on Twitter, where we'll link to the newsletter when it goes out and other fun things.

In the meantime, we're here to recommend the newest Wonder Woman origin story, Diana: Princess of the Amazons. This post will be in our first newsletter issue.

Disclaimer: we received an early digital copy of the book from the publisher in exchange for an honest review. 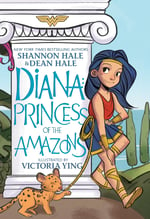 Diana: Princess of the Amazons
Written by Shannon and Dean Hale, Illustrated by Victoria Yang

From New York Times bestselling authors Shannon Hale and Dean Hale comes a story about making mistakes, learning the hard way, and growing up to become a hero.
Eleven-year-old Diana has an almost perfect life on the island of Themyscira. But even though she has a loving mother and many "aunties," she is an only child. The only child on the entire island, in fact. Every other person on the island is an adult who's the best in their trade and mighty in body, while Diana is small, sometimes clumsy, and not particularly good at anything. She's not Wonder Woman...yet.
What Diana needs is someone her own age whom to talk to. Taking matters into her own hands, she creates a playmate out of clay. It's all fun and games for a while, until things get out of control and Diana has to decide whether she's made a new friend...or a monster!

Why We're Recommending It

Diana: POTA opens with eleven-year-old Diana playing in the island paradise of Themyscira. She's surrounded by beauty, educated by her own personal tutor and loved by all. But she's the only child on the island, and terribly lonely. Everyone else has a role, but where does she fit in?

The Hales' work often focuses on themes of self-discovery, friendship and making good choices. (See: Real Friends.) In this story, young Diana is on her path to becoming Wonder Woman, but she's not there yet. In her loneliness, she decides to create a friend out of clay, copying her mother's creation of Diana. That friend is really fun, leading Diana on new adventures and into mischief. And if the pranks and rule-breaking make Diana uncomfortable, well... that's just part of having a friend and being a kid, right?

Except it shouldn't be. When Diana's new friend breaks the biggest and most important rule on the island, she realizes that friends shouldn't pressure you into doing things you don't want to do, especially if those things hurt people.

The story could come off as moralizing, but superhero stories have always been parables, so it's thematically appropriate. As in most Wonder Woman stories, Diana's departure from her sheltered upbringing leads her to some harsh realizations about the nature of the world. What makes Diana a hero, even as an eleven-year-old, is that if she makes mistakes, she works to correct them and strives to find the good in people.

By telling a story contained entirely on Themyscira, the Hales have presented a view of young Diana as she decides who she wants to be, without the hyper-violence of adult superhero comics.

For the young Wonder Woman fan, kids who enjoy adventure stories (and monsters!) and library collections. Fans growing out of The Princess in Black will find it especially compelling.

Want a peek at the super cute artwork? Here are a couple of pages direct from DC, the first of which shows Diana trying to get anyone to play with her and the second in which she's playing with her first friend: 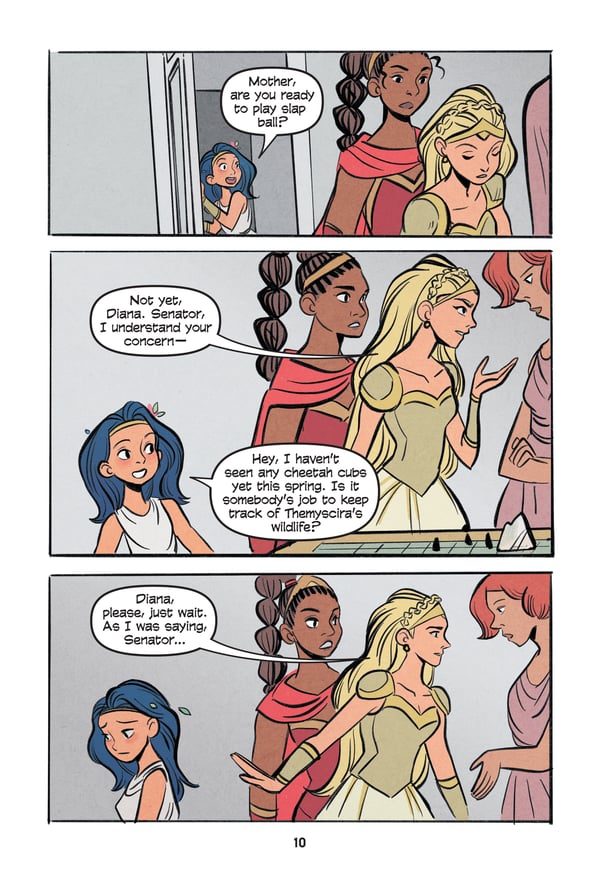 If you want to grab a copy for the kids in your life, here's a handy Amazon link and a link to all vendors via the publisher's website.

Don't forget to sign up for our newsletter for future reviews!

(Psst: Not the one below, that's for YA and adult comics.)