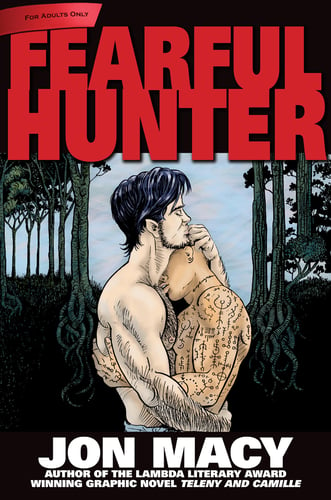 FEARFUL HUNTER is a fascinating mix of druid lore, punk/youth culture, and werewolves. The plot is summarized elsewhere, so I won't go into it too much. I will say that the author's intro definitely informed my reading of the story, giving it an allegorical bent that I might have missed otherwise.

If you read reviews of the store elsewhere, you'll probably see that it contains a lot of sex and nudity. The druids walk around naked most of the time, with the exception of any time they go into "town." They commune with their "allies," or nature spirits, through sex. The central couple, a young druid and werewolf, also have rather a lot of sex. If I interpret it correctly, they're young men in their first relationship. The sex doesn't seem out of place, is what I'm saying.

As for the art, Macy's pages with abstract or magical imagery are far more evocative than those in between. The art isn't in a style I usually seek out, so my appreciation of the book is much more skewed toward the plot.

Overall, I'm glad I read it. I probably won't be re-reading FEARFUL HUNTER, but if you've ever wanted to know if a druid will choose love with a werewolf over fulfilling his initiation rites... give it a try.

We read FEARFUL HUNTER, by Jon Macy, and it was a trip!