Jacque Nodell runs Sequential Crush, the vintage counterpart to Love in Panels, and we are delighted to have her on the blog today talking about a classic romance comic from the 60's and her new book!

Vintage romance comics have a bad rap for being all about the quest to snag a guy at the sacrifice of one’s self. “Date Insurance!” a story with art by Paul Reinman from the aptly titled series Going Steady (this particular story from issue #5, May/June 1960, published by Prize Comics) counters that notion and embodies all the qualities of a great story.

“Date Insurance!” begins with young Debbie telling us what she would say where she to be on the show, “To Tell the Truth” (stick around to the end to find out). The splash page also shows us that Debbie is an avid artist from a loving family. She and her father clearly have a special joking relationship, but he can’t keep up with his teenage daughter’s rapidly changing moods, and Debbie seems to be increasingly irritated by her parents’ constant interest in her life. 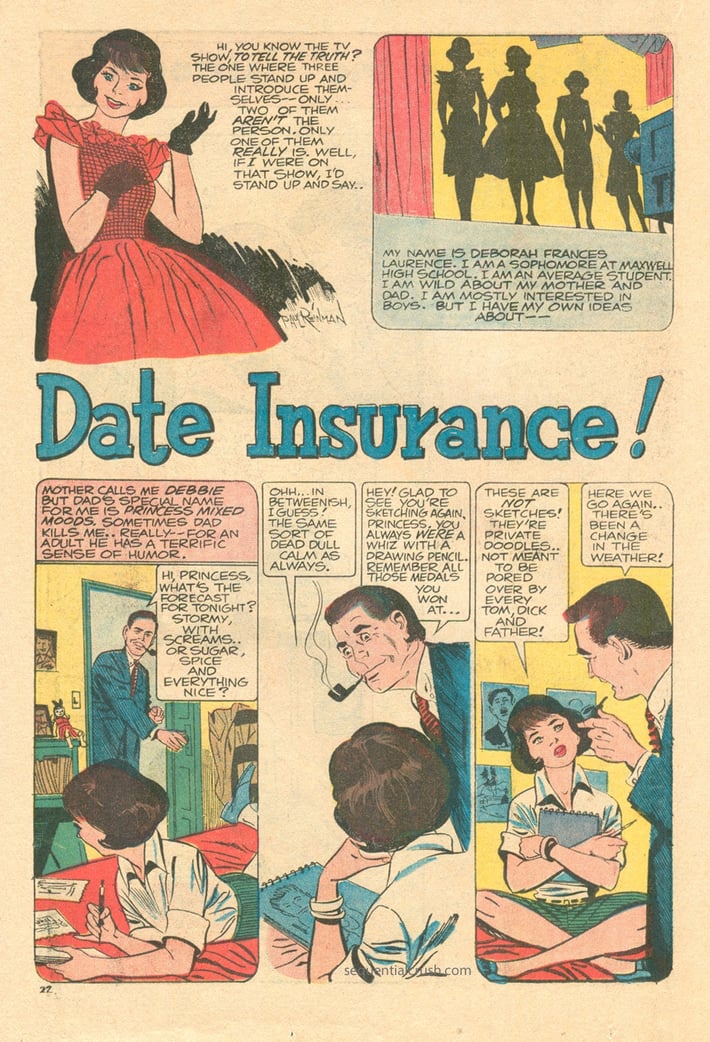 Not only is Debbie upset at her dad’s nosiness, she is bummed that all of her friends seem to have dates besides her. That is, until one evening when her friend Alice calls to set Debbie up with one of her brother’s friends named George Baxter. 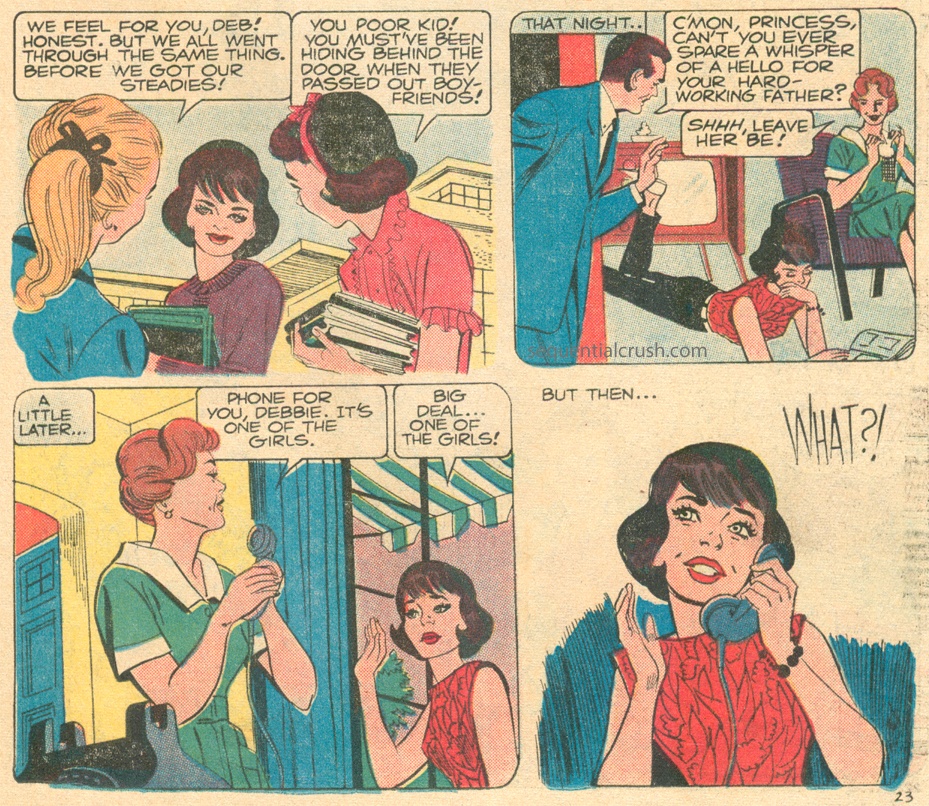 Turns out, George is lacking in the conversational and personality departments and while Debbie has a nice enough time on her date, she is by no means head over heels. But, when it comes to the next group outing, Debbie agrees to be George’s date because, “…It’s either George, or home alone again!”

While it is apparent that Debbie views George just as a date, Debbie’s friends try to get her to see the merits of going steady. The girls introduce Debbie to the concept of “date insurance” which entails going steady with a guy in order to keep him on retainer so as to never miss a social outing. Her friends convince her that without such “insurance,” Debbie may find herself without a date and out of the social loop. Later that day, George asks Debbie to go steady with him. 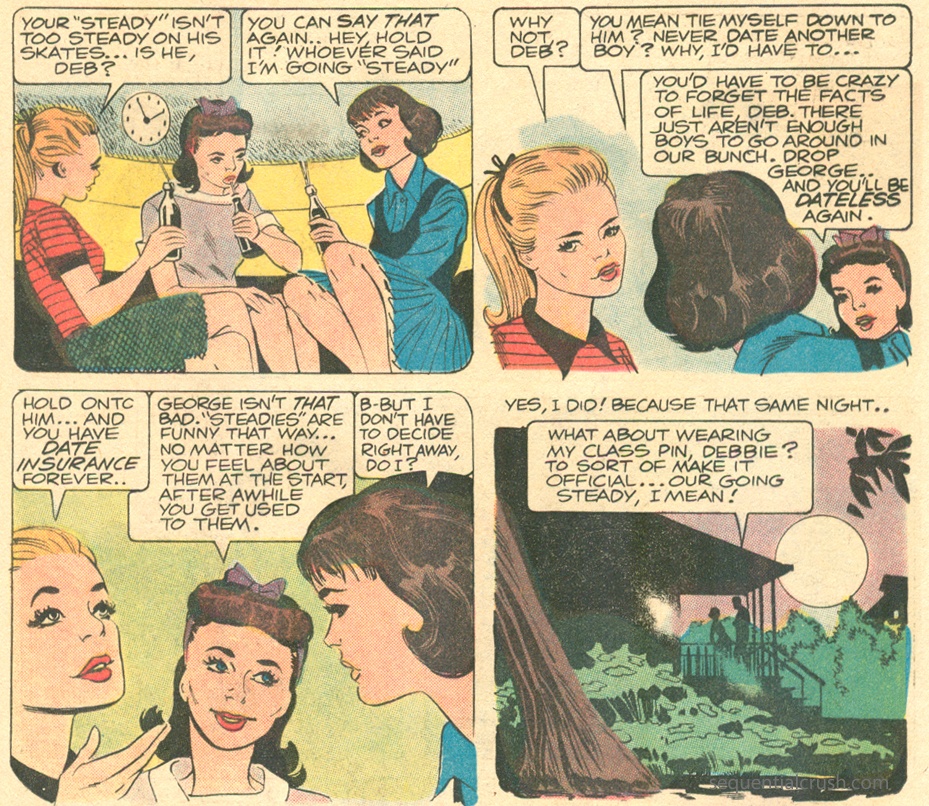 Needing to think things over before committing to anything, Debbie retreats to her room to draw, think, and lament the good old days when boys were to be avoided and sketching was her number one jam. Debbie reasons with herself that George is just like her and only interested in “date insurance” himself. 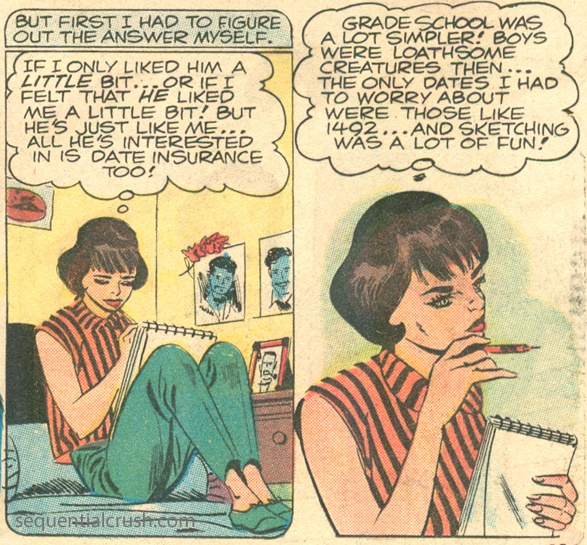 Debbie sits outside the school where she said she’d meet George with an answer. Still unsure of how she’ll answer George’s proposition, she continues to draw nervously. Debbie is approached by a young man curious about her artistic endeavors. As the stranger takes a further look at her sketches and compliments her skills, George approaches. Debbie takes George aside and confidently lets him know that she’s not ready to go steady.

And so, having been through her first few dates and the difficult position of turning someone down, Debbie is grateful for the experience as it forced her to come up with her own interpretation of what it means to have “date insurance.” Wise beyond her years, Debbie realizes that cultivating a multi-faceted personality, along with pursuing a passion that comes naturally is what guarantees one a date. In other words, “You, yourself… are your best date insurance.” And that’s what she’d say if she were on “To Tell the Truth.” Can’t argue with that, can you?!

If you liked this story and would like to read more vintage romance comic stories and advice about catching a date while still being yourself, check out my new book How to Go Steady: Timeless Dating Advice, Wisdom, and Lessons from Vintage Romance Comics, available on Amazon.

More of Jacque’s writing on all things vintage romance comics can be found on her website, Sequential Crush (www.sequentialcrush.com).