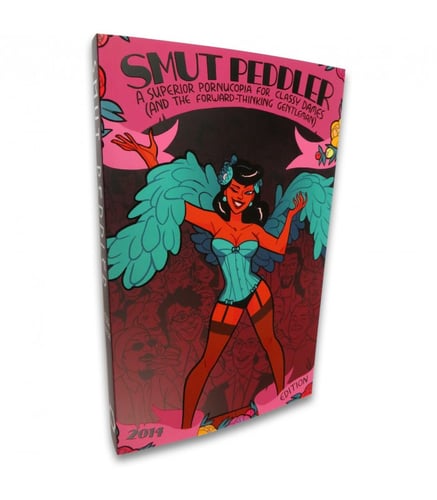 2012 Edition: Smut Peddler started back in 2003 as a series of dirty little minicomics featuring some of the coolest folks in indie comics. Now, it's back as a full-sized anthology, featuring 24 different stories of love, sex, and a little bit of angst by a huge array of talented creators.

This book offers something for everyone, showcasing a whole rainbow of relationships, sexualities, and genders, plus the occasional robot, satyr, shapeshifter, or major religious figure.

This isn't a porn or erotica review site, but these comics are SO GOOD I had to include them. Iron Circus says they're "by women, for everyone" and I agree. They feature a full array of relationships, bodies, situations, and art styles. Consent is present and enthusiastic. Much (not necessarily all) of the sex occurs inside a trusting relationship, with the romance that you'd expect. There are stories about couples who've been together for years, and couples who are just meeting. As with any anthology, you'll find some more to your liking than others, but these books are massive, so you're sure to find just what you want.

This review originally ran at Heroes & Heartbreakers in January of 2017. It applies to the 2014 Edition, but the original, published in 2012, is linked in the entry below. In 2016, the first themed volume, My Monster Boyfriend, was released, and a 2018 volume is in the works right now. I hear there will be robots. ;)

Last time I wrote about comics, I gave them a rating based upon the subjective criteria “can you read this on the train” and “how explicit is this.” This time, I’m just going to tell you: do not read this on the train unless you want some awkward pants feelings with sweaty strangers giving you creepy looks. I also suggest reading this book when not in the presence of children, your parents, etc. I DO suggest reading it with your significant other (battery-operated or human).

This review is based on the 2014 Edition, a thick volume in black and white that showed up on my doorstep in a completely innocuous media mail envelope. Little did my mail carrier know, subversive comics lay within! The subheading on this book is “A Superior Pornucopia for Classy Dames (and the Forward-Thinking Gentleman).” With that in mind, here we go!

Since there are 25 stories and I can’t fairly give you a synopsis of all of them, here are a few of my favorites:

A funny space adventure featuring a plus sized woman who gets butt implants that grant her special crime-fighting abilities. (And sexing abilities, natch.) M/f with giggles.

A sweet (historical?) story featuring a young man being harassed by his peers for being different. He’s a tinker, so when an alien spacecraft crashes in his backyard, the sexy alien needs his help to fix the craft. M/m with a HEA.

A very sexy arranged marriage story in which the arranged couple discovers an unexpected passion.

One Night Off by Lenny Broadfoot and Rowan Woodcock

A sweet and funny story featuring a gay couple having a night off from their kids. Particularly resonant with those of us who have kids and need a reminder of what it’s like to reconnect with a partner.