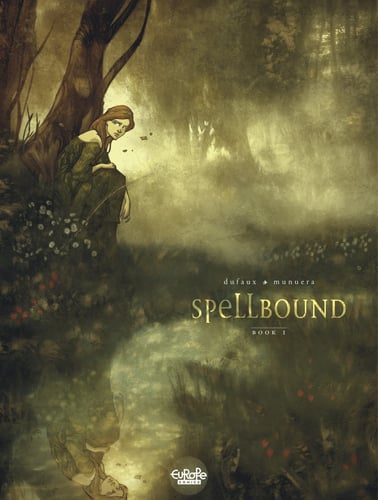 This first volume of the ongoing Spellbound series initiates us into Dufaux and Munuera’s Medieval-style fantasy land, a land brimming with witchcraft, demons, enchantments and foul-play. The whole of Middleland has been thrown into turmoil by the sudden and brutal murder of the king. The unfortunate victim’s dying wish was that his daughter, Blanche, should take the throne, rather than her weak-spirited brother. Thus Blanche finds herself catapulted into a position of power that she never expected, or even wished for. The grief-stricken young woman is forced to renounce her lover, and on top of that, the enemy’s army is assembled at the country’s border, poising to strike. Blanche looks like she’s off to a promising start as queen of the land, but unfortunately she’s no match for the various plots to topple her… at least, not yet…

This is a hard one to review, as I both loved and hated pieces of it. Each of the four volumes is 50-60 pages, combining for something close to graphic novel length. Each of the volumes is a distinct arc, but the overall story isn't complete until the last two pages of volume 4.

Here's the part I hated: there is no Happily Ever After. That's the covenant that the Romance genre has with its readers, and since it's been broken here, I have rated this as "romantic elements" and not "definitely a romance."

The first book opens with Blanche leaving her lover, Gaspard, because she has been called upon to serve her kingdom as the new queen. He takes it very poorly and visits an evil witch, Miranda, to put a curse on her.

Bad Things happen. Miranda is evil, after all. Blanche's brother is also evil, as is her mother. Everyone is evil, basically. Eventually, Blanche meets Maldoror, the prince of the World Below (hell) and he's very much a Lucifer archetype. He's blond and handsome and they fall in love. He helps her while everyone is scheming against her, she brings him back with a kiss from a magically-induced coma. Very standard fantasy/fairytale stuff. I'm going to try not to give spoilers here, but it's clear from about halfway in that Blanche is becoming everything she hates. She's becoming violent and untrusting and... kind of evil, herself. It could be argued that she's never actually a "good" character to begin with, but the reader does start out this journey giving her the benefit of the doubt.

In the first two volumes, I had serious issues with the portrayal of Blanche's scheming brother. He's a hunchback, and the story was falling into that ableist trap of making the disabled character evil... because he's disabled. The mother was similarly one-dimensional, as was the witch, Miranda. I was starting to feel like every "bad guy" in the book was going to be female or disabled. Not cool. Enter the advisors and "allies." We got a whole bunch of evil, white, able-bodied men. It became clear to me that maybe this was a story in which no one is actually good, which somehow bothered me less. Equal-opportunity evil, or somesuch thing.

In the end, I don't know if I can recommend this to romance readers or not. There are some stunningly romantic moments, a few interesting magical events, and many, many battles. As a French-to-English translation, some nuance may have been lost, but I think the art manages to convey the emotion and magic of the tale adequately. If you need an HEA, don't pick this up. If you want to see an anti-heroine killing lots of people and not ever being slut-shamed? This might be for you.

I reached the end of a fantasy romance comic and... no HEA. You can probably imagine my disappointment. But I still liked it? This is a long review, so enjoy these screenshots before you read.