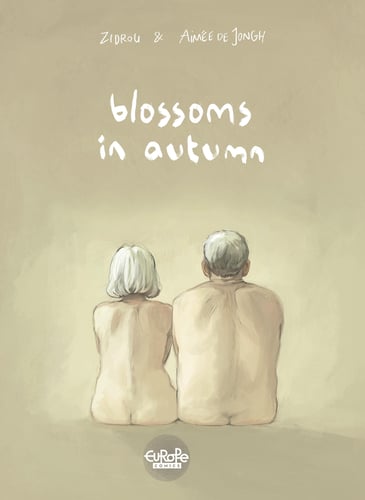 Ulysses, a middle-aged widower, is forced into early retirement from his moving job. At a loss for what to do next, the course of his life is changed by a chance encounter with a fellow lonely soul at, of all places, his son's OB/GYN office. Mediterranea, who recently lost her mother, runs a cheese shop that she took over when her beloved Corsican father died years earlier. A romance blossoms between these two people who are supposedly in the "autumn" of their lives and they soon find themselves embarking on a most unexpected odyssey.

Review: Blossoms in Autumn, by Zidrou and Aimee de Jongh

This comic is a solid C grade from me, taking the average of a lot of bits I absolutely loved and several that I would like to remove entirely.

The book, which is set in urban France, begins with Ulysses, a 59 year old man, being forced into retirement from his job as a mover. We follow him for several pages as he explores the corners of his new gray existence. His wife died many years ago, as did one of his children. This leaves him with a grown son (an OB-GYN) and a group of friends with whom he no longer works. He doesn't even have a cat. It's achingly lonely. There's also a scene in which he visits a sex worker and it's clear that this is a regular thing for them.

We meet 62 year old Mediterranea as she is saying goodbye to her dying mother, then passing the funeral arrangements on to her brother. Her life is also lonely, but she owns and operates a cheese shop, so she's not retiring any time soon.

The romance that unfolds between the two is sweet and funny and very real. The ways in which their bodies are illustrated is both realistic and empathetic. Even as Mediterranea, a former nude model, is despairing of her wrinkles, her body isn't presented to the viewer as an object of disgust. It simply is. This is all the more clear when the two characters come together physically for the first time. It was quite lovely to see two mature adults together in this way. The art style is soft and the colors are muted, which gives the entire book a gentle feel.

But (you knew this was coming)  there are two things that really bothered me about the book. The first is the relationship with the sex worker - not that it exists, but how it's treated. The chapter in which Ulysses says goodbye to her is titled "the comfort woman," and anyone who's read about the comfort women during WWII will understand why that bothered me a whole lot. This is a comic in translation, however, so I sort of let that slide. My real issue is that it's very clear that Ulysses is seeking sex as a way to feel less alone, but we never get any idea what Mediterranea's dating or romantic life has been like. We know that she never had children and that she's been acting as caretaker for her mother... but doesn't she get to have a physical outlet as well? Doesn't she have the right to physical pleasure before meeting Ulysses? There are a few subtle jokes at her expense throughout the book (Ulysses joking about jerking off to her nude photos as a teen, etc) and the whole thing just feels off.

The second bit is a big spoiler, so I'm going to give you a quick verdict first - buy this if you want a sweet romance comic featuring two older protagonists, but keep in mind that the HEA might not be what you expect.

The issue I had with the ending of the book is that Mediterranea becomes pregnant. She's 62. They quickly discuss terminating the pregnancy, but go ahead. There's no ultrasound. Instead, the characters blow off their families and run away to Corsica. The book ends with Ulysses holding Mediterranea from behind as they both cradle her very pregnant belly.

I would have preferred an ending without a miracle pregnancy. I'm not sure why it was necessary... at all. Do we not believe in a happily-ever-after beyond menopause? Is there really a reason why the heroine's menopause needed to stop after meeting Ulysses? I just... I'd like to chop off the last twenty pages of this book.