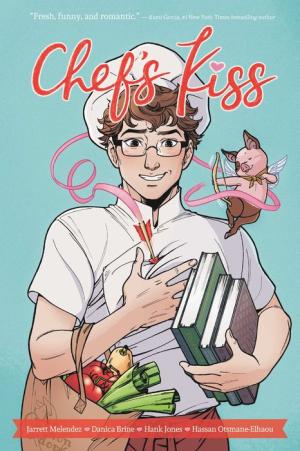 Watch things start to really heat up in the kitchen in this sweet, queer, new adult graphic novel!

Now that college is over, English graduate Ben Cook is on the job hunt looking for something…anything…related to his passion for reading and writing. But interview after interview, hiring committee after hiring committee, Ben soon learns getting the dream job won’t be as easy as he thought. Proofreading? Journalism? Copywriting? Not enough experience. It turns out he doesn’t even have enough experience to be a garbage collector! But when Ben stumbles upon a “Now Hiring—No Experience Necessary” sign outside a restaurant, he jumps at the chance to land his first job. Plus, he can keep looking for a writing job in the meantime. He’s actually not so bad in the kitchen, but he will have to pass a series of cooking tests to prove he’s got the culinary skills to stay on full-time. But it’s only temporary…right?

When Ben begins developing a crush on Liam, one of the other super dreamy chefs at the restaurant, and when he starts ditching his old college friends and his old writing job plans, his career path starts to become much less clear. 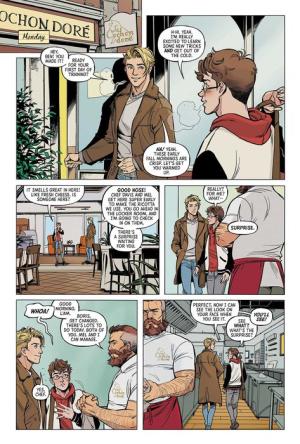 I was excited for Chef's Kiss because I love romance comics and have a restaurant background and hey, there's a pig! But the reality is that the story is boring and the romance is nearly non-existent. The creators clearly loved writing and illustrating the cooking scenes, but that's not what I thought I was signing up for and it took me two weeks to read a 160 page graphic novel. Not ideal. As for the romance, it's between Ben and the sous-chef, Liam. One of my issues with Chef's Kiss is that the power imbalance is never addressed. Liam is a few years older than Ben and he's Ben's direct supervisor. I guess they're not together until Ben passes his tests and is officially hired, but to not mention it at all in the entire book felt wrong. I spent years working for crappy bosses who hooked up with all the staff to think this is a non-issue. Most of those people (everyone I'm thinking of is a woman but I'm sure it's not limited by gender) were in low-paying, part-time jobs with no security or benefits. After the relationship/hookups ended, they often felt they couldn't stay employed at that restaurant and left. Surprising no one, the sous-chefs, pastry chefs and exec. chefs never left for the same reason...

Then again, the romance isn't the focus of this comic. If post-college coming of age plots and cooking are your jam, you might like this a lot!

I received a digital copy of this book from the publisher for review.