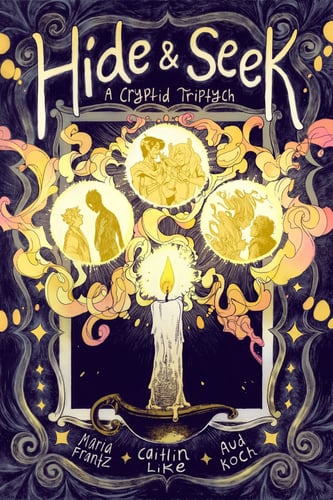 HIDE & SEEK: A CRYPTID TRIPTYCH is 79 pages of gorgeous smooching magic! From a cozy stroll through snowy hemlock forests to a deep dive through crystal caves, each story tells the tale of a search for love in a wild world of cryptids and magic. With art to charm and words to spellbind, this collection of three short comics from consummate artists Maria Frantz, Caitlin Like and Aud Koch is the perfect addition to your Hallowe’en (& General Spoopy-Feels) bookshelf!

The table of contents:

Maria Frantz’s “Hector and the Hidebehind” is the charming tale of a grumpy old biologist who finally meets the cryptid he’s been researching for years — and things don’t go as planned.

Caitlin Like’s “My Reluctant Prince” is a hilarious romp about a royal bodyguard who is banished from the surface world, and must choose between returning home or rescuing his kidnapped prince.

Aud Koch’s “The Flicker in the Tower” is an epic ballad about a dragon on a quest to save the cursed fairy prince he loves.(Each comic is guaranteed to contain one good smooch, or you get your money back!)

It's always tricky to give one solid review of a book that contains multiple stories, and Hide & Seek is no different. According to the first page, each of the three stories came from the same set of five prompts:

1) a Fairy Prince very low in the succession line (15th)

2) his body guard, who is an exiled prince

5) at least one kiss

The stories differ widely in aesthetic and content, so I'll take them one at a time.

Hector and the Hidebehind is spoopy sweetness between a pudgy old nerd and a cryptid who doesn't head south for the winter because he doesn't want to leave his love. But of course he doesn't tell his human counterpart, he hides out in a shed like any shy monster would do. Maria's black and white art is cute and her old biologist is round and sweet. It's seriously adorable and I loved it.  (17 pages inc cover)

My Reluctant Prince is the only one of the three in full color and it's like an upside down Fairy cave in which everyone assumes the other person doesn't love them and ends up in a big mess. It's also sweet, but with a bit of an action scene as the bodyguard tries to defend his Prince. If you like Like's artwork in Maiden of the Machine, you'll like this one as well. (17 pages inc cover)

Aud Koch's The Flicker in the Tower is by far the longest of the three, coming in at 35 pages of comics and prose. I'll admit that this was my least favorite of the three, though that doesn't mean I didn't like it. It's difficult for to me read full-page prose (as in, not set to standard book margins) and I tend to avoid it. Koch integrated the prose into most pages, with border artwork and some pages with prose on one half of the page and art on the other. That said, Koch's art is always visually stunning and I actively seek it out in anthologies. These pages are done primarily in black and white, with shadowing in blue. Fluid lines, lots of movement and a thoroughly satisfying ending made up for my own picky issue with the prose pages.

In total, the book comes in at 79 pages and I think the suggested price of $10 on Gumroad is fair. There are several pages I'd gladly hang on my wall, for whatever that's worth.

And yes, I believe spoopy comics should be read all year long.

Suzanne received a copy of this book from the creators for review.