ADULTS ONLY Ed Fiedler is a common man. 61 years old and employed as a scribe in a royal palace, his most regular client is Lucardo von Gishaupt, a forever-young aristocrat . . . and member of the mysterious and revered Night Court. When the eternally 33-year-old Lucardo and the aging Ed develop feelings for one another, both are forced to contend with the culture shock of a mortal man's presence among the deathless, the perilous disapproval of the sitting Lord of the Night Court, and Ed's own ever-present mortality, threatening to bring an end to their romance in the blink of an everlasting eye. This is the first book in a planned four-volume series.

LETTERS FOR LUCARDO is that rare piece of graphic erotica that surprises me. I've grown accustomed to everything from tentacles to ghosts to aliens, but an actual human over the age of 40? Whoa.

Lucardo is a vampire, forever 33. His love interest, Edmund, is a 61 year old human, serving as scrivener (scribe, notary, etc) for the vampire Night Court. Their age difference is complicated by the fact that Lucardo is well over 400 years old, but physically much younger than Ed. Ed, however, feels unworthy and old at times. This could have turned into a story of "well, yeah, but I don't mind." Instead, Noora Heikkilä has written Lucardo as a tender person (and lover) who shows Ed his affection and attraction, rather than serving up empty platitudes. Readers are given an older man who is still a complete sexual and emotional being, with a lover who is deserving and appreciative of him.

The art? It's lovely. While reading, I was compelled to send a photo (above in the blog post) to a friend. I love the play of emotions over Ed's face and how Noora consistently shows us rather than tells us. It also doesn't hurt that Lucardo looks like a certain gentleman who played Jefferson in a popular musical...

As for the plot, it's more complex than I had anticipated. I was wondering how this story could be drawn out over 4 graphic novels, and now I know. I'm still not sure yet whether Lucardo's family is a) bigoted, b) evil, c) pranksters, 4) all of the above?

1) Since readers are dropped into the story after months of flirting and conversation between Lucardo and Ed, we don't see much of what has drawn them together. (They pretty much get down to business, which is standard for erotica.) I would welcome development of their relationship via flashbacks or something.

2) WHAT THE HELL THAT ENDING. Maybe I shouldn't have started the series with only 1/4 books out.

If you'd like something sexy and sweet with a paranormal twist, this may just be the book for you. If you don't want one hell of a cliffhanger at the end? Wait a while. I'm basically sitting here stalking Iron Circus's feed waiting for the announcement of Book 2. (Yes, I'll let you know when it goes up!)

Letters for Lucardo, by Otava Heikkilä 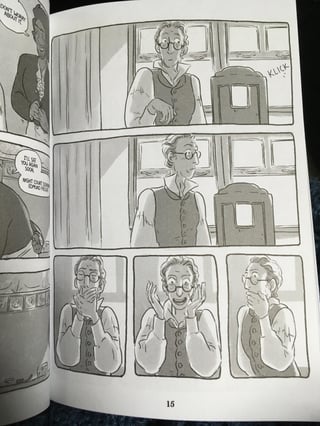