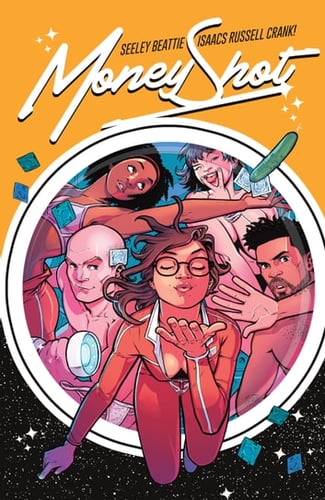 Physicist Dr. Christine Ocampo is on a mission to discover distant worlds, encounter exotic civilizations, seek out strange species, and, well, get busy with them. Space exploration is expensive business, but science calls and porn pays.
A STORY ABOUT SCIENTISTS HAVING SEX WITH ALIENS FOR THE GLORY OF MANKIND—AND MONEY.
In the near future, space travel is ludicrously expensive and largely ignored. Enter Christine Ocampo, inventor of the Star Shot teleportation device with a big idea: She'll travel to new worlds, engage—intimately—with local aliens, and film her exploits for a jaded earth populace trying to find something new on the internet. Now, Chris and her merry band of scientist-cum-pornstars explore the universe, each other, and the complexities of sex in MONEY SHOT!

Money Shot is a classic case of an entertaining premise falling apart after the first few issues. Without doing any research, I suspect that the creative team had planned out one arc and then the series was successful enough that they got more issues and just flailed about for a while. All that said, the first trade is very funny and appropriately porny.

The setup is this: a Space Force scientist, desperate for funding under a not-even-thinly disguised Trump administration hatches a scheme. She and four other scientists--with different specialties of course--will travel the universe and f*ck all the humanoids who'll have them. And they'll do it on camera, for money. They're something of cultural ambassadors/porn stars, learning about the different species, sometimes getting shot at, and usually having pretty creative sex with the non-humans and with each other.

There are lots of sex jokes, as you might expect, but there's also underlying romantic tension, a character who needs to (and does) unlearn some toxic masculinity and a main character who unfortunately doesn't learn to be a non-crappy romantic partner until possibly the end of Vol. 3.

I loved the art, which is bright and not overly-stylized, with some creative aliens even though they all adhere roughly to humanoid forms. I've seen some criticism of that, but the characters state that they need weird but not too weird for their audience back on Earth and that they want humanoids with um... orifices for logistical purposes. Essentially, there's a reason they're not going for aliens made entirely of spikes.

The cast is comprised of five cis queer (though not really labeled) people and one little robot who films their sexcapades. One is Latina, two are Black, one is Asian and one is White. They all appear to be in their 30s and are able-bodied.

Overall, I recommend this series as a fun, sexy diversion, at least in the first volume. There are three available on Hoopla and while I'm glad I borrowed the second and third rather than purchased them, the first is definitely worth the money.