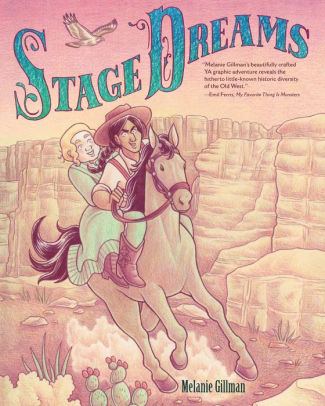 Buy it at Your Local Comic Shop!

In this rollicking queer western adventure, acclaimed cartoonist Melanie Gillman (Stonewall Award Honor Book As the Crow Flies) puts readers in the saddle alongside Flor and Grace, a Latinx outlaw and a trans runaway, as they team up to thwart a Confederate plot in the New Mexico Territory. When Flor—also known as the notorious Ghost Hawk—robs the stagecoach that Grace has used to escape her Georgia home, the first thing on her mind is ransom. But when the two get to talking about Flor's plan to crash a Confederate gala and steal some crucial documents, Grace convinces Flor to let her join the heist.

Featuring two queer heroines forging their own paths in the Old West, this graphic novel is a fun and thoughtful adventure romance. Grace is a trans Georgian belle (sans money) escaping service in the Confederate army when she meets Flor, a queer Latinx lady bandit. It's a meet-disaster that turns into a working relationship when Flor realizes that she can't ransom Grace. Then as the two of them work together to uncover a Confederate plot, their relationship turns into something more romantic. The whole thing is adorable.

Gillman's signature colored pencil artwork is perfect for the setting, rich in dusty desert hues and bright pops of color on clothing and blushing cheeks. The characters themselves are rendered with honesty and care, with Grace's soft, sweet face sometimes sporting a bit of a 5 o'clock shadow and Flor's propensity for wearing men's clothing matching her prominent nose and devilish grin. Annotations at the back of the book provide historical details and context, as well as insight into why Gillman made certain narrative choices.

What makes this book an absolute keeper, however, is the way that queerness both drives and doesn't drive the story. Grace's flight is why the two women meet and comes into play when she's seen by her father at the Confederate gala, but her gender is accepted by everyone as fact, especially by Flor. There's no lengthy angst-filled coming out, but we do get a gentle and funny scene in which both women are being fitted for formal gowns. (Flor tries to keep her falconry glove on while wearing a fancy dress.)

Overall, this is a fun, action-filled western adventure with a strong romantic plot and a big middle finger to the Confederate cause.