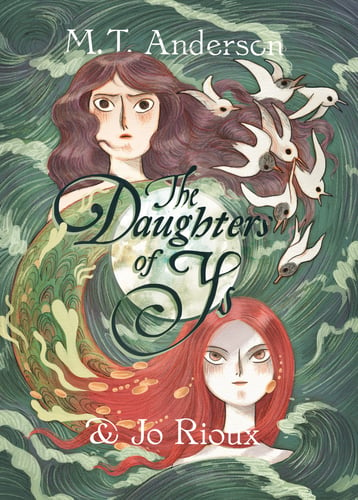 Like many folktales, there's a fairly straightforward message here: be good and kind, not selfish and envious. (Also the evil sister is the one who has sex. I'm not a big fan of folktale slut-shaming, but there it is.) I think it's pretty clear here that the sisters have both been trying to deal with their father's mess in their own way. The elder by avoiding him and her responsibilities, the younger by taking what pleasures she can while doing what no one else will.

I came away from the book with a strong dislike of their father and empathy for both sisters. I can't say much about the way their relationship turns out without spoiling the book entirely, but when Rozenn asks what their life might have been like if they had stayed together instead of fracturing apart after the death of their mother? A defining moment.

As for the art, I was initially put off by the characters' faces. Everyone's face is square, with a flat profile and no cheekbones. Or a totally sunken face and massive cheekbones like their father.

However, the scenery is beautiful and once you sink into the story (ship jokes, you're welcome) the odd faces are not noticeable except as a distinctive style. Fitting the ocean setting, the color palette is full of greens and blues, seaweed browns and pops of white and red. Panels are full of movement, hair and dresses flowing along with the water and hillside landscape.

I read the hardcover edition and under the dust jacket is a beautiful ocean scene with a modern boat, suggesting that inside the book and under the waves, lies a story of adventure and mystery. It's really clever and lovely packaging all around.

If you're looking for a folktale retelling for young adult and adult audiences, this is a great pick.

Content Note - I won't be passing this off to my nine year-old just yet. While the sex scenes are not terribly explicit, there are at least three. I think the way they're drawn is perhaps PG-13? More importantly, the violence is well... violent. Decapitation, stabbing, feeding people to sea monsters...

Disclosure: I received a copy of this book from the publisher for review.