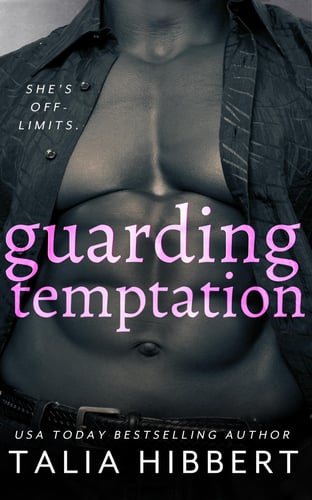 Protective. Obsessive. And rough around the edges.
James Foster knows the rules: you don’t fall for your best friend’s little sister. Nina is too young, too reckless, and too busy saving the world to be tied down by the commitment he craves.
If he was smart, he’d stop wanting her. But she’s the one thing on earth James just can’t quit.

Fierce. Principled. And impossible to resist.
Political campaigner Nina Chapman is sick of one-time things. She wants forever, and she wants it with her brother’s best friend—but James still sees her as a child to be coddled.
So when a controversial article lands Nina in hot water, she finds herself under his protection and under his roof. It’s a shame James doesn’t want her in his bed, too.
…Or does he?

Warning: this red-hot novella contains one radical leftist heroine, one over-protective hero, one annoying childhood nickname, and a shared apartment with only one bed. Also, Brexit. But not too much, I promise.

Please note: a version of Guarding Temptation was previously published as Resisting Desire in the Rogue Nights anthology. This version has been revised and expanded to double its previous length.