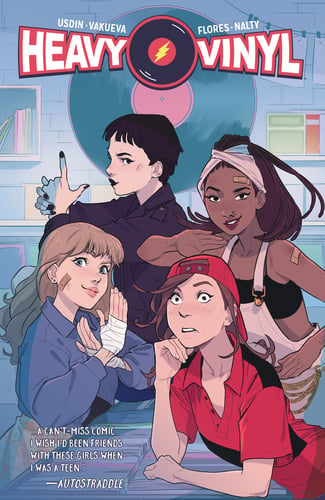 When Chris joins the staff at her local record store, she’s surprised to find out that her co-workers share a secret: they’re all members of a secret fight club that take on the patriarchy and fight crime!

Starry-eyed Chris has just started the dream job every outcast kid in town wants: working at Vinyl Mayhem. It's as rad as she imagined; her boss is BOSS, her co-workers spend their time arguing over music, pushing against the patriarchy, and endlessly trying to form a band. When Rosie Riot, the staff's favorite singer, mysteriously vanishes the night before her band’s show, Chris discovers her co-workers are doing more than just sorting vinyl . . . Her local indie record store is also a front for a teen girl vigilante fight club!

Follow writer Carly Usdin (director of Suicide Kale) and artist Nina Vakueva (Lilith’s World) into Heavy Vinyl, where they deliver a rock and roll tale of intrigue and boundless friendship.

Before we jump in here, I'm going to be honest about a couple of things. First off, I'm a child of the 1990's, so I was about the age of these characters during the Spice Girls and Portishead etc. I wore these clothes and watched these shows and a lot of my love of this comic is likely tied up in seeing myself in this book.

The main character, Chris, is a queer teenage girl with a crush on another girl who may or may not be queer. (She is, it's a romance, it's adorable!) I'm trying to think of a piece of happy media that featured queer girls that would have been available to me as a teen and I have nothing. Books in which queer adults die miserable? Plenty of those. Books with queer teens just hanging out and fighting the patriarchy? Nooope.

Chris is the newest employee at a record shop. She's also a teen who does teen things like attend school, do homework, develop a crush on a friend, and so on. The shop is scheduled to host a special show by her favorite band, Stegosaur, when suddenly, the lead singer goes missing! It's then that she's inducted into the "secret teen girl vigilante fight club" based out of the shop. The plot then follows Chris as she tries to figure out where she belongs within this group, deals with her feelings for Maggie, and solves the mystery. The characters in the fight club are a Black girl, Kennedy; a Puerto Rican girl, Dolores; and two white girls, Chris and Maggie. The leader of the gang is also white, but I'm not sure if she's a teen since she's the manager of the store. (I assume she's an adult.) The comic does the thing a lot of media has fallen into lately, where the group is diverse by having "one of each," rather than incorporating the reality that marginalized people usually hang together. I've forgiven it here because it's a group of employees, not a group of friends at school, but I did want to point out that I'm seeing it more and more in comics.

This was initially promoted as a 4 issue arc with a complete story, but the ending here is clearly leaving room for more story. I don't want to spoil the ending, but there's no way you could perceive it as being finished.  The series also started under the name "Hi-Fi Fight Club," so I feel a bit yanked around by the series overall. What's your name? Are you a one-off or are you an ongoing series?

The art is really cute. The throwback 90's clothes, the backgrounds, the color palette. All good. Vakueva does a great job capturing the pure awkwardness that is the "is it a date?" stage of a crush, plus some action scenes. She has a style that's both distinctive and approachable, and it's a great fit for the series.

Overall, this is a fluffy queer romance story with a feminist music-loving punch-the-bad-guys bent. I really like it as a piece of YA fiction, even if the story ends in a way I wasn't expecting.