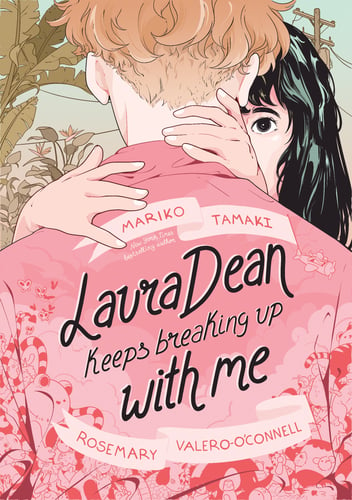 Author Mariko Tamaki and illustrator Rosemary Valero-O’Connell bring to life a sweet and spirited tale of young love in Laura Dean Keeps Breaking Up with Me, a graphic novel that asks us to consider what happens when we ditch the toxic relationships we crave to embrace the healthy ones we need.

Laura Dean, the most popular girl in high school, was Frederica Riley's dream girl: charming, confident, and SO cute. There's just one problem: Laura Dean is maybe not the greatest girlfriend.

Reeling from her latest break up, Freddy's best friend, Doodle, introduces her to the Seek-Her, a mysterious medium, who leaves Freddy some cryptic parting words: break up with her. But Laura Dean keeps coming back, and as their relationship spirals further out of her control, Freddy has to wonder if it's really Laura Dean that's the problem. Maybe it's Freddy, who is rapidly losing her friends, including Doodle, who needs her now more than ever.

Fortunately for Freddy, there are new friends, and the insight of advice columnists like Anna Vice to help her through being a teenager in love.

Review: Laura Dean Keeps Breaking Up With Me

This book is not a romance, as you might have guessed from the title. It is, however, one of those coming of age stories that really spoke to me. The story covers a lot of territory, but there are two main themes: toxic romantic relationships and friendship.

Laura Dean is that person you knew in high school who's laid back and magnetic and you don't know why you want their approval so much. (Mine was named Dave. He treated me like sh*t and I kept going back.)

Frederica (Freddy) is a queer high school girl with an on-again off-again relationship with Laura Dean. Laura cheats on her, ghosts her, and generally flits in and out of Freddy's life with the expectation that Freddy will still love her, no matter what. And Freddy does. The title of the book is apt - Laura Dean breaks up with Freddy over and over, often without ever saying it.

Freddy writes to an advice columnist, reaches out to a seer/donut shop clerk (I loved this character), and complains constantly to her friend Doodle. Freddy isn't easy to like at times. She's selfish and totally wrapped up in a toxic relationship, blowing off Doodle over and over when Laura Dean sends her a text. I'm not sure about you, but I've been that terrible friend. I've also been the Doodle in a friendship. The whole book is familiar and uncomfortable, but ultimately cathartic.

As for friendship, Doodle appears initially to be a one-note character. She's the stalwart friend who supports Freddy through all the breakups and blow-offs. But then there's a turn. Doodle needs Freddy's help and reaches a breaking point. She tells Freddy "You're a terrible friend." Because she is.

Freddy comes to a realization about how her relationship with Laura Dean is impacting her relationships with her friends and family, as well as any new relationships in her life. She breaks the cycle once and for all, and we get a moment to cheer for her... and for ourselves.

The story is illustrated mostly in black and white, with pops of pink and full page panels used to stunning effect. The book covers some really heavy topics, but even though I cried a few times (don't judge me), I felt lighter by the end.

For everyone who's been a Freddy or a Doodle, this book is like that hug where you start crying from relief, but end up laughing while you blow your nose. This is a gross metaphor, but it's exactly how the book made me feel. A recommended read, but don't expect a romantic HEA.

I received a copy of this book from the publisher for review.