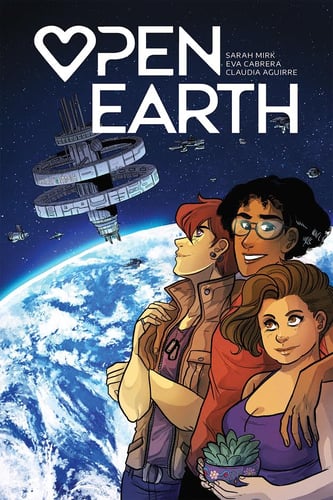 Rigo is a young woman of her time: specifically, the time just after the collapse of Earth. After living her whole life on a small space station orbiting the planet, the cultural norms and rules of her Californian parents are just history to her. In between work shifts at the station air farm, Rigo explores her own desires, developing openly polyamorous relationships with her friends and crewmates. When she starts to feel one of those relationships change, however, Rigo must balance her new feelings with the stability of her other relationships, as well as the hard-earned camaraderie of a small crew floating in the vastness of space. But, as the ship motto goes, "Honesty keeps us alive."

Love in Panels was excited to announce this title back in February, so you can imagine how thrilled I was to see it up for early review. I have a lot to say about it, so if you don't feel like reading on - here's the TL;DR - I adored OPEN EARTH.
The book focuses on Rigo, a young Latina woman born on the California space station, and her relationships with several other "First Generation" people on the ship. The plot is given a kick when one of her partners, Carver, has an opening in his room. Space on the station is at a premium, and more than one of Carver's partners wants to move in. I'm using the word "partner" here to mean sexual partner, but it soon becomes apparent that the First Generation to be born in space uses it to mean a more committed relationship among a polyamorous and largely open group of friends.

One of the aphorisms built into California protocol is "Honesty Keeps Us Alive," and that's mentioned a few times, as Rigo struggles with her feelings vs. her expectations of herself. She may have grown up in space, but she's dealing with the same things most of us here on Earth think about. It's a given that she and Carver will continue to have sexual relationships and close friendships and romantic relationships with others, but within that context, what does it mean to commit to someone? Their other partners express concern that Rigo and Carver will couple up and exclude everyone else, which is a reasonable thing to worry about. (Also a valid life choice, as shown by a few other couples on the ship.) It's not how Rigo and Carver want to do things, however, and the way they come to finally talk through everything is both realistic and romantic.

Moving on from the plot! A few things put this book into my "READ IT NOW" list. Let's talk about them, shall we?

First - the sex. The book is 107 pages, but there are at least 4 sexual encounters depicted on page. They appeared to be heterosexual in nature, but I have no reason to think any of the characters identify as heterosexual and it's on page that Franklin (enby) and Carver have a relationship, as well as Atwood (femme) and Rigo. None of the characters seemed to identify as trans, but it also doesn't seem like gender has much of a place on this station, so maybe that's not a thing? There certainly aren't gender-assigned jobs, only pronouns and attraction. The sex is more humorous more often than not, especially a certain scene in a zero-gravity chamber that made me laugh out loud.

Edit 6/11, modified above: Oni Press let me know that Franklin is nonbinary, which I didn't get from the read. I went back through and now I see two references to Franklin as "them," but the context is such that I read it as Rigo talking about two characters, not as a singular "them." On second read, knowing that Franklin is nonbinary, I did read them that way. It's one of those things that is a little less clear in comics, because you don't have the "she said" versus "they said." Fewer written pronouns. Anyway, the comic is more inclusive than I originally read it as. So, yay!

The creators give enough time to the history of the California space station without bogging down the narrative. We learn that California seceded from the United States and aggressively pursued enviro-tech. We also learn that things went downhill quickly for the rest of Earth as "the oceans rose and the rains stopped." The space station was launched with a few lucky scientists on board before things truly went to hell, but since the station on Earth stopped responding to their transmissions, the folks on the ship don't know what happened. Is everyone dead? We don't know. We do see a view of the Earth from space and it's clearly a very different topography. Rigo has a conversation with her father about maintaining Earth culture and traditions for when they go back, but Rigo says that it sounds like that culture was responsible for the destruction of Earth... It's a very interesting conversation and, given the fact that California opened borders to Mexico after the secession and declared Spanish the national language, it's reminiscent of diaspora discussions. There's a lot of code-switching in the book, with Spanish and English mixed in a seamless way. Not everyone code-switches, however, which again, feels like a conscious choice and a piece of overall characterization.

The last thing I want to talk about is how a lot of the cultural changes are subtle but so clearly intentional.

Rigo has hairy underarms because um... they're on a spaceship. It makes total sense that they're not shaving, because wouldn't water be at a premium? Who cares about shaving your groin or underarms when resources are scarce?

I also appreciated that Rigo is fat, even though everyone on the ship is eating the same carefully developed vegetarian diet. Some bodies are always going to be fat, regardless of diet. It's about time that we populated our sci-fi and post-apocalyptic worlds with all kinds of bodies.

Last, to my garden-loving delight, plants are special. There's an incredibly sweet romantic gesture near the end of the book and it's got to do with the giving of a plant and... my heart. It's a succulent, of course, because of low water needs, and it's similar to the plant on the cover of the comic, tying everything together nicely.

As I said, I adored this book. I could keep talking about it forever, but probably shouldn't so that you can get your copy and not be completely spoiled. This is what I want to see in the future of romance comics - thoughtful characterization, intricate worldbuilding, cute/hot sex, and characters to cheer for.