You can see a short preview at their main site here.

Bianca Crowley has spent her whole life pretending to be straight, because that’s what her mother and society expect of the beautiful redhead. But when she meets the out and proud Gamer Girl - who already has the kickass costume and awesome super-powers - Bianca finally finds an outlet for the feelings she’s been suppressing her entire life.

Surfing the current wave of popular, female-focused comics — like Sex Criminals, Captain Marvel, and Batgirl — this is a mature love story with all the sex, hijinks, broken hearts and inappropriate cell phone pics that entails.

Gamer Girl & Vixen is a comic book series created and written by Kristi McDowell and Sean Ian Mills, with art by Gemma Moody and lettering by Taylor Esposito. The series will appeal to fans with a soft spot for well-rounded villains, and those looking for more lighthearted adventure and romance in their comics.

The goal of this project is to create a fun and exciting series that hooks into the growing trend of brighter, friendlier comics. The day of the grim, male action hero is over. Fandom is demanding more female characters and creators, and Gamer Girl & Vixen is the perfect new franchise to fill that niche.

The first volume of Gamer Girl & Vixen is called "Flirty Money," and that spirit of fun and puns continues throughout the book. I saved it for a rainy day and, while you could certainly refer to all of 2017 that way, I was happy to make it my last comic read of the year. See, it's about "love, lesbians, and larceny," which is a delightful twist on the traditional uber-hetero uber-serious superhero comics that seem to dominate the genre.

Gamer Girl & Vixen is about two wannabe supervillains, Gamer Girl (Liz) and Vixen (Bianca), learning to villain and falling in love. Although they attend the same university and have a class together, their meet-cute occurs while GG is testing her new hologram bracers and Bianca is practicing her thievery. They end up running away from campus security together, then from Jump Shot, a superhero-in-training. So. Many. Basketball. Puns.

The book follows a traditional romance arc, with a meet-cute, a big reveal, dark moment of the soul, resolution, and an HEA. Both of them are in long-term relationships with other people when the book starts, however. Bianca is dating a man because her mother is a controlling awful-person (that's a noun), and Liz is living with her girlfriend, Ellen, even though their relationship is way past its expiration date. I have a general dislike of cheating in the books I read, but I guess they don't "technically" cheat until after they've broken up with their SOs, so I'll give that a pass.

I am also pretty done with the out character having to convince the closeted character to choose her over acceptance, but it's certainly a big part of Bianca's character that she's the perfect sorority girl and feels a strong need to maintain her public persona. (See her bedroom?!) Sure enough, the costumed adventurer thing is addressed. How better to transform yourself into a completely different person? As Jump Shot and Gamer Girl tell Vixen, it's a pretty obvious metaphor. (See the third sample down below.)

If you're wondering if you should buy Gamer Girl & Vixen... maybe? Do you like the idea of lesbian supervillains? Can you handle some really irritating yellow-on-aqua and white-on-red text boxes? Do you want to spend $19.99 for 105 pages of content? If the answer to all of these is "yes," then I say go for it. Despite text-boxes-to-burn-your-retinas, I really enjoyed it. I do think that if I had paid $20 for it, I would have been frustrated, however. Comics are expensive for a host of reasons, but usually if I buy a trade of this length, I expect it to be in the $15 range. If, however, you go to their website, you can read the entire first issue for free! I'd suggest starting there before you make a purchase. 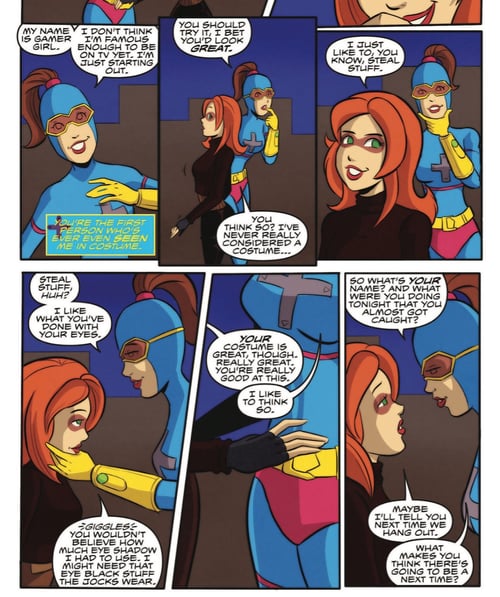 (Love in Panels received a copy of this book from the creators in exchange for an honest review.)