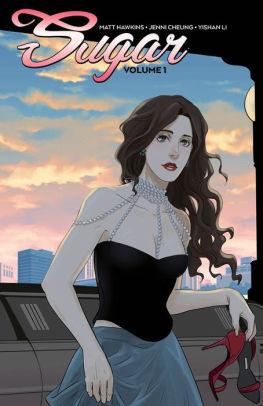 A companion book to both Sunstone and Swing, Sugar is about a couple who embark on a relationship that starts as more of an arrangement and ends with them falling in love...but that love has consequences! Julia works three jobs and is trying to finish college in her early 20's. John is recently divorced, still stinging from that breakup and trying to start anew. Neither has ever done anything like this before and the emotional swings they face challenge what could be a perfect match.

Sugar is the second Original Graphic Novel (OGN) from Top Cow/Image as they expand the Sunstone universe. When I reviewed the first spin-off, Swing, I was disappointed in the writing, as it was stilted and awkward. I'm happy to say that I didn't have the same issues with Sugar, Vol. 1. Since this is the same writing team, Matt Hawkins and Jenni Cheung, I'm going to speculate a bit as to why I think the writing was better this time around. But first, let's talk plot and art!

Sugar is about a young woman working three jobs to support her mom and sister and try to put herself through college. Julia is twenty-three, having delayed college due to financial reasons. (As we learn, she took her student loan money and paid for her sister's medical bills following a car accident with an uninsured drunk driver.) The book opens with her working at her diner job, a scene you can see in the preview pages we posted. It's there that she meets John, an older man (mid-thirties? forties?) fresh off a divorce from a woman who repeatedly cheated on him. Stuff happens, and they end up in a sugar baby type of arrangement. The dark moment in the book, the big conflict, is one that's been foreshadowed and plays on the "evil other woman" a bit too much, but I did appreciate that it wasn't related to guilt over sex work or someone outing them.

Speaking of which, Matt Hawkins closes the book with a note on why they chose to write the story as they did, to make the sugar baby arrangement more palatable to a widespread audience. I think it sometimes borders on shaming sex-work, which I know wasn't the intention. I'll be interested to read what sex workers think of the portrayal.

Yishan Li's art is quite lovely, with care given to make the background cast diverse. I would have liked to see a bit more diversity within the main cast, but that's not her doing. I recognized the art from Buffy: The High School Years, so it was a bit of a surprise to see so many sets of breasts. I should have been expecting all the boobs, I know.

I promised speculation on the writing quality, so here goes: either because they're becoming more experienced at writing romance or because they didn't have to write a story that spans a decade, the story flowed better this time around. I also wonder if it's in part because Swing is clearly somewhat autobiographical and a little distance from the subject matter makes for an easier time building a narrative. There is one small issue with the timeline, where it's stated that they've been together for a few months in one place and then weeks in another, but I assume that's just an 'oops,' as the rest of the story implies it's been a few weeks only.

Whatever the case, I liked the book! I liked the book enough that I'm going to continue on with Sugar and Swing, as well, in hopes that this means Hawkins and Cheung have found their stride writing together.