Today we'll be talking about comics terminology and laying the foundation for the rest of the series. Need a refresher? Take a look at our intro post from last week.

Part 1: An Introduction to Comics

What is a comic? What’s a graphic novel? What’s an issue? What’s manga?

Hi. It’s okay. Don’t worry. This is a lot more simple than it appears. You can read lots of comic theory and take college-level courses on interpretation if you want, but my goal is to get you to read a review or pick up a comic and know what to call things. That’s it! With that in mind, here’s a short list terms that we’ll be using as the series continues.

Comics are, at their most basic, sequential art. Will Eisner, for whom the Eisner Awards were named, is credited with coining the term in 1985, though the art form existed long before then. Comics are the most recognized form of sequential art and I’ll be using the term “comics” to cover a wide array of work, including comic strips, webcomics, graphic novels, and more. Comics generally consist of illustrations with some combination of speech bubbles and/or text boxes. They are usually, but not always, divided into panels, or individual boxes that are arranged in a sequence on the page. Unlike manga, comics are read from left to right, top to bottom. Manga are read right to left, top to bottom.

Comics in Japan are recognizable to a Western audience, and are usually referred to by fans as manga, and come with their own artistic pedigree. Just like Western comics, manga can be love stories, adventure stories, movie or video game adaptations, adapted into movies, and everything in between. We don't cover much in translation at Love in Panels, but manga have a very active fandom and can be found in most bookstores. We’ve given romance comics a home here because most people weren’t talking about them. If you’re interested in manga, start here. That’s a list of the basic categories of manga. Pick your category and go forth.

Below is an example of a josei manga,  The Prince in His Dark Days. 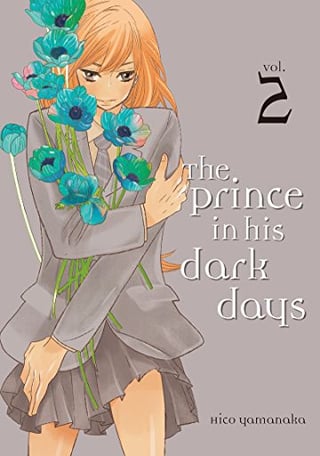 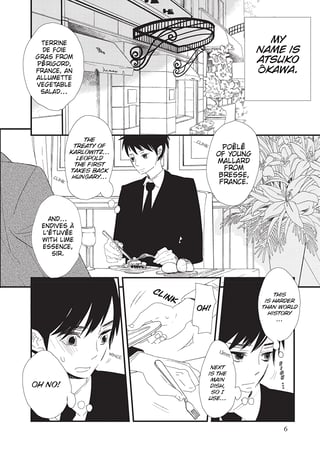 Comic Strip - These are what you see in newspapers. They’re usually a horizontal sequence of panels with some sort of punchline at the end. Think Calvin & Hobbes, Dilbert, or Peanuts. My grandmother called them “funnies,” which I think describes the intent pretty well. Some webcomics are organized in strips as well.

One of my favorite webcomics (of all time) ran as strips. Check out Girls with Slingshots:

Panel - These are the boxes you think of when you think of comics. Panels, like windows or frames. THe above strip has four panels. Borderless panels are called “splash” panels. (A full page or two-page image is called a “splash” page.)

Webcomic - Sometimes called webtoons, these are comics on the web or internet. They come in all genres, styles, and lengths. Some have been going for years and years (Questionable Content and the like) and new webcomics pop up every day. They are usually available to read for free, with creators funding their work via ads, merchandise, and Patreon.

Page - Many webcomics are released as pages. When/if a webcomic is prepared for print production, each page is a page in the book. Pretty straightforward. Take a look at Novae, by KaiJu. They release pages for the webcomic, before gathering them into chapters, which they sell on ComiXology and elsewhere. 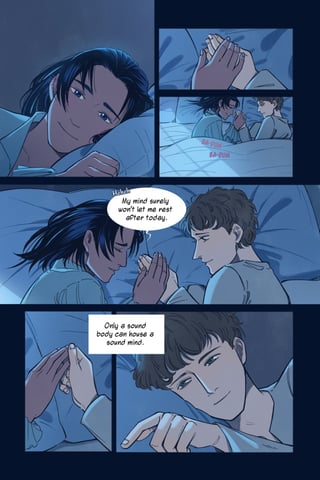 The photo below, from left to right, shows an Issue, a Trade, and a Graphic Novel. All of them are called "books" in the biz, just to make it extra fun for new readers! 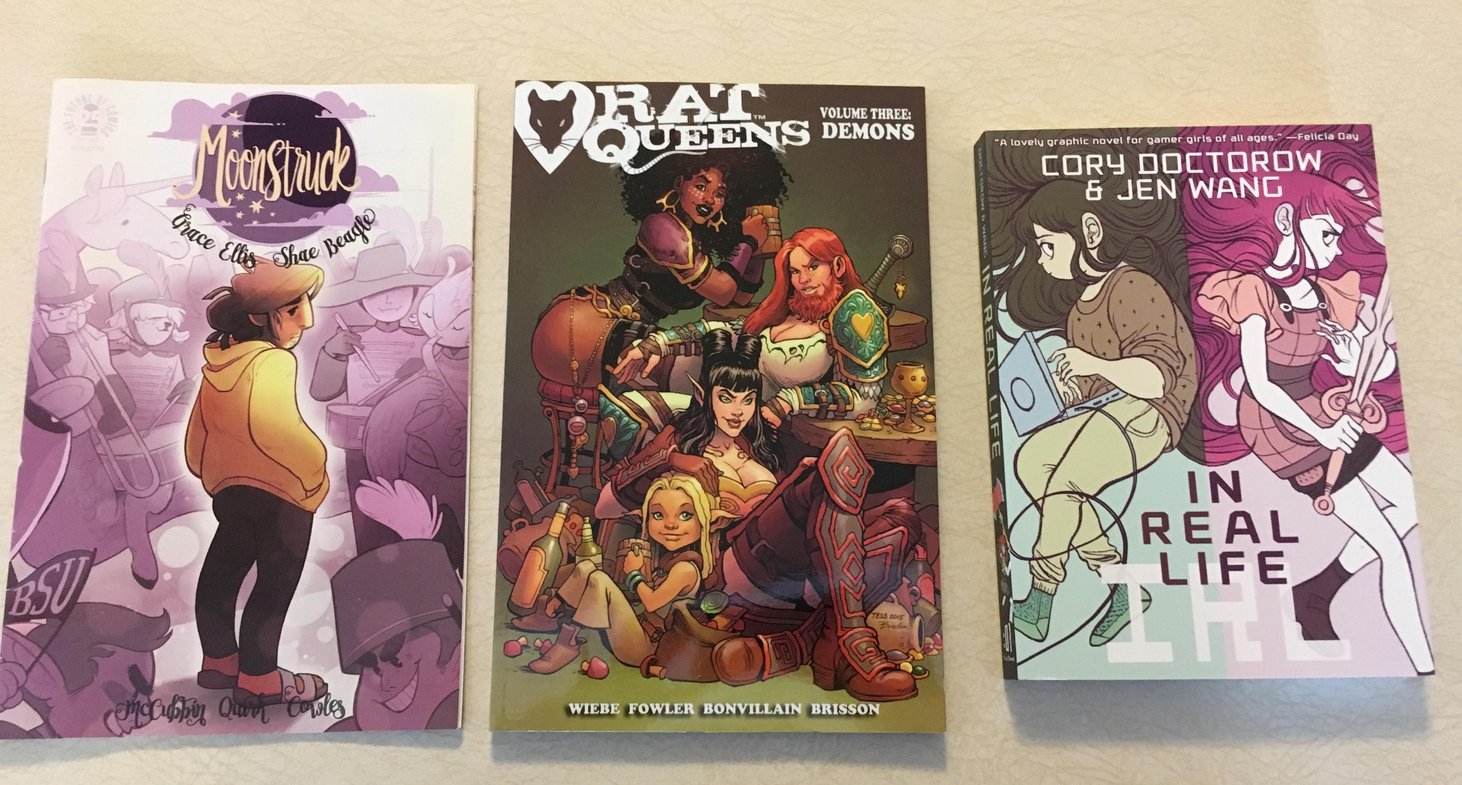 Issue - An issue is a serialized portion of a comic, usually released monthly or bimonthly. Sometimes called “floppies,” these are usually staple-bound and numbered. (Issue #1, Issue #2, etc.) These are what die-hard collectors go for, with rare, well-preserved issues of classic comics going for hundreds of dollars. Since comics-writing is similar to screen-writing, I like to think of a comics issue like an episode of TV. Each issue usually has an interior arc, with some kind of cliffhanger at the end, and fits into a larger story arc that will be bound in what’s call a Trade.

Here's an issue of MOONSTRUCK when you open it. This one is glossy, staple-bound, and falling apart a little because my daughter and I read it several times. 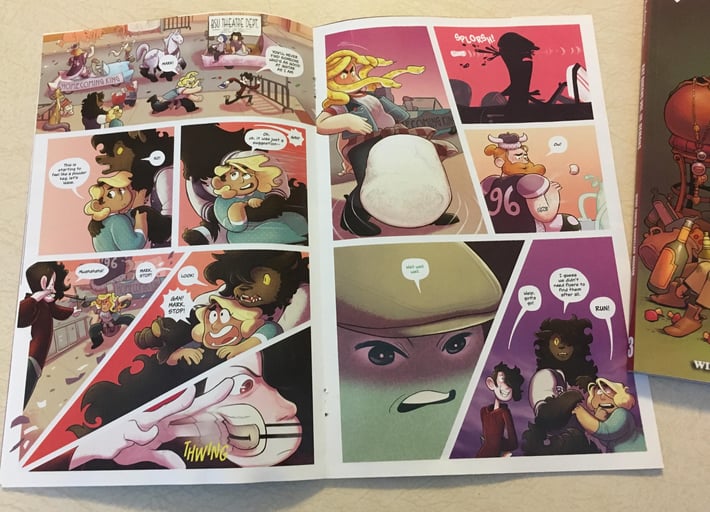 Trade - Trade Paperbacks, or Trades, are bound collections of 4-8 issues that are usually tied together with some sort of theme or arc. For example, the superhero may encounter, fight, and defeat one villain in Volume 2 of a series. These are numbered as Volume 1 (Vol. 1), Volume 2, etc. If the numbering gets confusing, or if you aren’t sure if something is an issue or a trade, look at the blurb. Trade blurbs will say something like “Collects Issues #12-17.” The binding on these is sturdier, with a thicker stock on front and back. Libraries usually stock trades, either in paperback or hardcover, because they’re sturdier and can be covered.

This is an interior spread in RAT QUEENS, Vol 3. The pages are glossy, it's all bound nicely, and it doesn't flop open unless you're a monster and break the spine of the book. 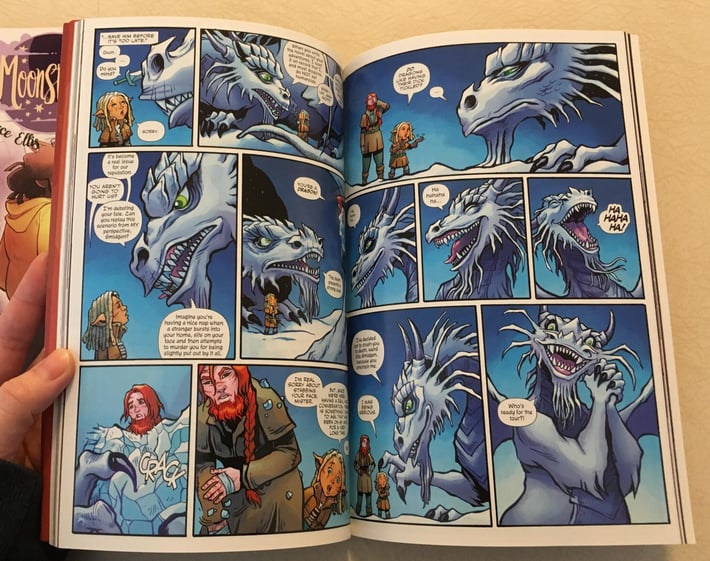 Graphic Novel - This is a somewhat controversial term. Most review sites and lists count the trade collections of serialized comics in with the standalone graphic novels, so it could be argued that they’re the same thing. However, there’s long been an effort to classify graphic novels as the “intelligent” sort of comic, since tougher topics are usually handled in graphic novel format rather than in issues.

That said, I do need to give you the definition I’ve come to use. I call anything that’s been serialized and then collected a “trade.” Anything that’s been printed on its first run as a bound book (at least 50 pages) is what I call a graphic novel. The GN must tell a complete story, though it can be broken into multiple books, like MARCH. Any attempt to call THE SANDMAN graphic novels simply because they’re well written and considered a classic will not fly in my house. They’re excellent, they’re comics, they’re available in issues and in trades.

Neil Gaiman backs me up on this. Way back in 1995, the LA Times quoted him saying:

"I remember once at a party running into the editor of the literary page of a major newspaper.... And he was asking me what I did, and I said, 'I write comics.' And I could see him turn off--it was like, This is somebody beneath my nose. 'Well,' he said, 'which comics do you write?' and I told him this and that, and then I said, 'I also do this thing called 'Sandman,' and he went, 'Wait, hang on, you're Neil Gaiman!' He said, 'My God, man, you don't write comics, you write graphic novels .' And I suddenly felt like someone who had been informed that she wasn't a hooker, that in fact she was a lady of the evening."

Contrary to what you might hear, I’ve found graphic novels to be an easier approach to comics than some series. The Marvel Comics Universe is intimidating! SHATTERED WARRIOR, a sci-fi romance graphic novel? Not as intimidating! You can learn how to read the book and know that, when you’re done, the story will be complete.

Here's a look inside IN REAL LIFE, by Cory Doctorow and Jen Wang. This GN has a smaller page size but a larger page count than the trade next to it. The pages are matte and sort of thick, making it easy to read and sturdy enough for library use. 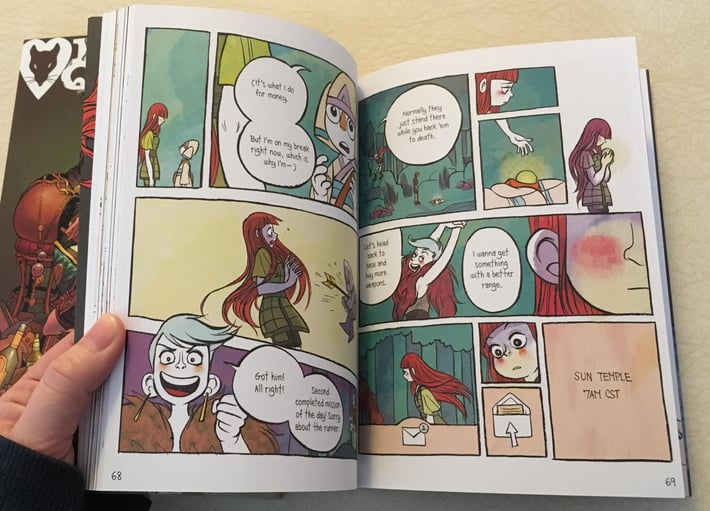 Process, creators, publishers. How to read comics and how creators consider readers in their processes.