Today we'll be talking about how comics are made and how we read them. Hint: the writers and artists think about the reader the entire time they're making the comic.

Need a refresher? Take a look at the intro post and the terminology post from last week.

In this post, we’re going to quickly go through the creation process for the average comic and then talk a little about reading them. The two are closely tied, and for good reason.

How to Make a Comic - The Abbreviated and Simplified Version

To make a comic, you need someone capable of the following tasks: writing, drawing, coloring, and lettering. Sometimes it’s 4 or 5 people. Sometimes one person does it all. For this example, I’m going to use HEAVY VINYL, a series from Boom! (The series was originally called Hi-Fi Fight Club.) The issue I’m holding was built by a 5 person team, plus a designer and editors.

Here are the credits: 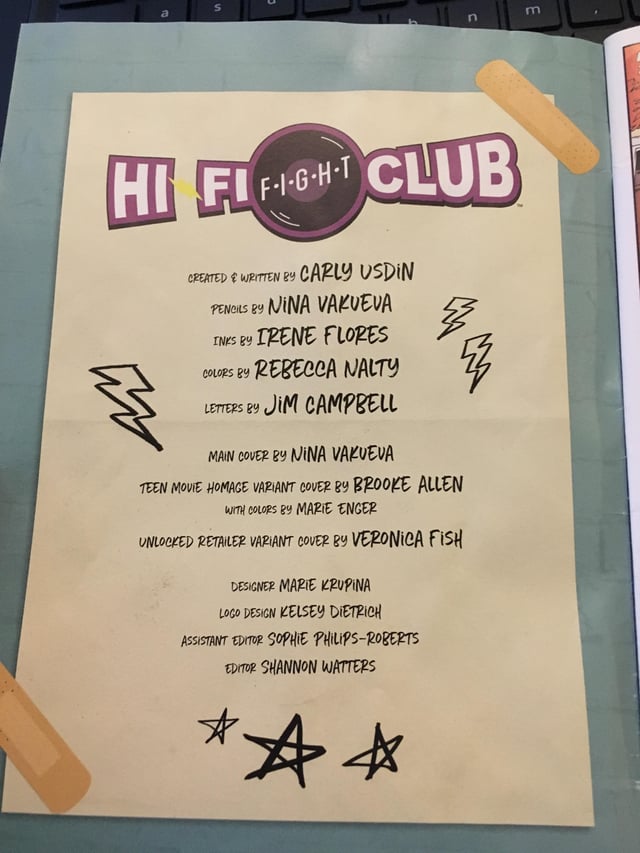 Let’s start at the top. “Created and Written by Carly Usdin.” This means that Carly came up with the series idea and wrote the script for the issue. Scripts vary from book to book and team to team. Some writers give the artist a page-by-page story, while others detail each individual “shot,” like a film director. It can be fun to read the back pages of a trade because sometimes you’ll get a few pages of script to look at.

“Pencils by Nina Vakueva.” Nina is the primary artist on this comic. She does the equivalent of story-boarding and designs the characters. Her art is the foundation of what the next two artists contribute.

“Inks by Irene Flores.” Irene takes the penciled pages from Nina and adds those lovely black lines and washes of shadow that give the images structure. Inking is a really interesting process and I could spend days watching artists like Jen Bartel.

“Colors by Rebecca Nalty.” Colorists, like inkers and letterers, do not get enough credit. The colors set the tone for a comic and individual scenes within, and can make or break a comic. Not every comic has a colorist, since many are in black and white. In those cases, ink washing contributes the shading.

“Letters by Jim Campbell.” The letterer makes all those fabulous speech bubbles and descriptive text boxes. They make sure all the words fit, look great, and flow with the narrative. The letterer helps you to know who is talking and when, which can be tricky if a panel contains multiple people.

If you look down the rest of the page, you can see a whole bunch of other people who have a hand in the making and promotion of the comic, whether directly or indirectly for Image. A lot of comics, especially webcomics, are a one-person endeavor. This means that one person is doing all of those jobs. Be patient with your weekly updates, readers.

Alright, that’s who makes a comic. Now, how do you read them?

This is a Big Subject. I’m not going to be able to give you an in-depth guide here without turning it into a book. Thankfully, lots of people have already written the book(s)! Scott McCloud’s are the most frequently recommended, so I’ll go ahead and give you the links here.

Understanding Comics: The Invisible Art - A guide for readers and creators alike. It’s a comic that explains comics.

Making Comics: Storytelling Secrets of Comics, Manga, and Graphic Novels - Like the above, but geared toward creators.

Reinventing Comics: The Evolution of an Art Form - The title pretty much says it. McCloud talks about how comics are changing and where they're heading.

Comics engage readers in a different way than prose. Comics can't tell you in words what the characters are smelling or feeling, for example. You might see a few scent lines drifting up from a pie and toward a character or you might see a panel that shows you fingers clutched around a piece of cloth. In either case, your mind draws the connection. Writers and artists work together to give you just enough information, without bogging down the narrative with text boxes and clunky speech.

Emotion is often conveyed through facial expressions or closeups on gestures like the wringing of hands. In "Ruined," a story from FRESH ROMANCE, VOL. 1 by Sarah Winifred Searle, the characters are uncomfortable with each other but just got married. There are no words on the entire page, so how does Sarah show you their feelings?

Color Palettes
Color choices do a lot for a reader. They often set the tone for the whole comic. Browns, greens, and yellows might give you an earthy, relaxed feel, like this page from TAPROOT. 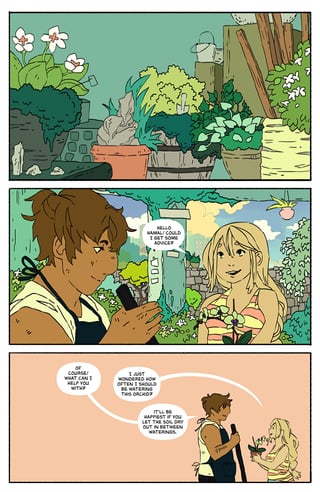 Dark, vibrant colors like you see in this page from VERONA give you a heightened sense of danger and action.

Sometimes a comic will shift colors, a choice that conveys a tonal change without the writer saying "and now, the comic is going to be happy again."

Pay attention to pagination - the creators do.

Pagination, or the layout of the comic, controls what you see and when. Big reveals are after a page-turn. The explosion might be in the middle of the book, composed of panels on each side. The kiss might get an entire page. When the creators dedicate a page-turn or an entire splash page to a scene, it's a signal to the reader that what you're seeing is important. Take this splash page from SPELLBOUND. You can probably guess that this is a Big Deal in the story.

What’s Not Said is Just as Important as What Is

Comics have to walk the line between not-enough-info and just-enough-secrets. I don't often re-read novels, but I will go back through a comic a few times to pick up on details I missed the first time. Like a mystery novel, you'll often see things in the background on a second read that, with hindsight, are very clearly foreshadowing future events.

Comics like SEX CRIMINALS have backgrounds full of jokes and references, like a memorable issue that takes place in a sex shop. I'm not going to give you a screen shot here in an attempt to keep this post relatively SFW, but if you'd like to read a whole bunch of dirty jokes, that's the comic for you.

Next week, we're going to talk about how to manage your budget while reading all these fabulous comics!