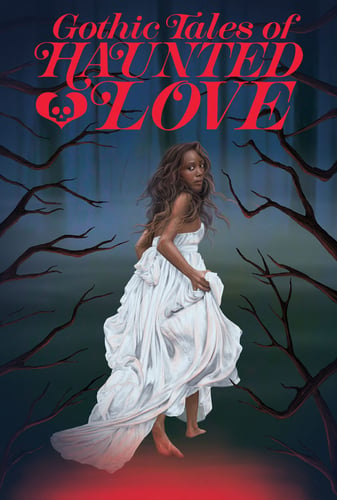 Gothic Tales of Haunted Love is an exciting new collection of gothic romance comics.In 1950s Vietnam, a lost soul comes to the aid of a farmer’s field under attack.In Victorian Boston, a new governess comes to care for the rogueish widower of a stately manor and his charming brood of children.A fashion journalist lands the interview of her dreams – but it unearths deadly secrets of Taiwan’s most popular fashion designer.A Sioux elder heals a recently deceased woman who sets out to recover her lost love. And a young bride spins a story of murder and deceit that paints her husband as a killer . . . but is there any truth to her tale?Featuring 19 original stories from some of modern comics’ finest talent, Gothic Tales of Haunted Love collects fragments of lovers torn apart, ghostly revenge, and horrific deeds, in the vein of 1970s gothic romance comics such as Haunted Love, Ghostly Tales, Dark Mansion of Forbidden Love, and Gothic Romances. Discover a diverse range of heroes and villains, spirits and monsters, in a modern reimagining that will leave your heart pounding and broken in the same seductive breath. Contributors and stories include:

Gothic Tales of Haunted Love was one of my most anticipated titles of 2018. I backed it on Kickstarter and was enchanted by the images I saw in preview. You can read the launch post here. All of this is to say that I suspect my expectations were set too high and somewhat unrealistically. The resulting anthology is a solid piece of work, filled with beautiful gothic paintings and some creative twists on gothic stories of old.

It's also not romance. The love in these stories is that of a fleeting encounter with a phantom; a powerful need to protect children from an abusive father; a war-time show of brotherhood (or more). There are a few HEAs, but it's probably better to approach this anthology as an experiment in trope subversion than as a romance anthology. Heroes and heroines come from varying sexual orientations and racial and ethnic backgrounds and occupy space in different time periods and locations. There's certainly a gothic element to each story, something spooky or unexplainable or just plain terrifying, but I'm not sure the volume as a whole is cohesive.

I will say that, given the current political climate, it was immensely satisfying to see a female serial killer take out her romantic competition before realizing that it was the man she desired who was the true obstacle to her happiness. Whatever it takes to keep those kids safe and happy, right?

Overall, I found myself visually drawn to the paintings and to several of the comics. My heart, however, was most engaged by the foreword written by Jacque Nodell, who runs the vintage romance comics site, Sequential Crush. She walks us through the history of gothic romance comics and how they changed to be less romantic and more of a horror genre. It's a fascinating piece of comics history.