Sunstone is so popular that not only is Stjepan Šejić continuing the story with a new pairing in Mercy, but publisher Top Cow is also putting out two other series that are loosely connected to the Sunstone universe. 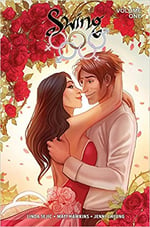 Swing, out in May (digital, print is June) is first up, and I've read a preview. It's really good. You're going to want to pre-order this thing, I promise. (You can do that here: digital, print.)

Spinning off from the universe of Sunstone comes a slice of life romantic story about a couple trying to regain the sexual energy from the beginning of their relationship by swinging with other couples. An emotional journey of two people fighting to stay in love.

You can see some preview pages over here!

Sugar comes out in July, and I haven't seen a preview but have already got it pre-ordered because of reasons. "Whoops, we fell in love!" is one of my favorite tropes ever. You can pre-order it here!

A companion book to both Sunstone and Swing, Sugar is about a couple who embark on a relationship that starts as more of an arrangement and ends with them falling in love...but that love has consequences! Julia works three jobs and is trying to finish college in her early 20's. John is recently divorced, still stinging from that breakup and trying to start anew. Neither has ever done anything like this before and the emotional swings they face challenge what could be a perfect match.

Top Cow's Matt Hawkins was on Twitter a few months ago, talking about how hard it is to write romance comics, and I immediately thought "I need to interview this guy."

So hey, here's the interview!

Swing and Sugar are both connected to the Sunstone universe. How did the books come about?

When Sunstone started doing so well we looked at the romance, slice of life category for sex-positive books and there weren't very many. We'd have Sunstone readers come up to our convention booth eager to get similar books and leave disappointed since we didn't have any. So we decided to create a line of books!

What's it like writing as a couple? Do you take turns, is one of you the "lead" on each book, etc? Also, how have you not killed each other yet?

Jenni helps me tremendously with the up-front plotting and refining the dialogue after the art is complete, but the intervening part I do most of the grunt work of it which works out best since this is what I do full time. I need her and Linda's perspective to do this book though, I couldn't do it without their input.

Matt, on Twitter a few months ago, you mentioned that writing romance in a comic is a lot different from writing action in a comic. Can you expand on that? Is it because so much of the plot is internal?

Yes, I've found  writing romance to be incredibly hard. It's difficult to make a couple in a fight look interesting visually, so it has to center almost completely on the dialogue and our emotional involvement with them. That takes time and build which is at a premium in comics. It's one of the reasons we went with the OGN model instead of doing monthly books.

In Sci-Fi you need to worry about the same things, but visually you can make things interesting to look at without a lot of effort. Aphrodite IX had dragons fighting space ships. Symmetry had legions of AI and robots at war. Writing this has made me a far better writer and I wish I could go back and rewrite some of my sci-fi given these new writing epiphanies.

What's next for the Sunstone/Sugar/Swing universe?

My wife and I have a book club where we pick books and reads them together on our kindles. Gives us something fun to talk about and do together. We just finished The Water Knife which is REALLY good. We also recently read American Gods and we both really loved that one as well!