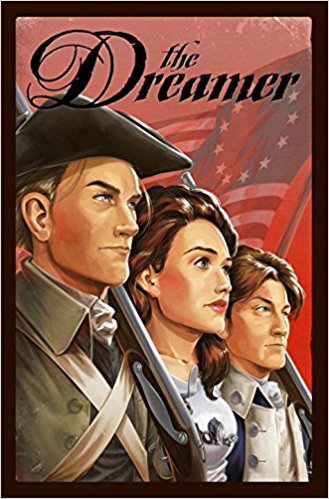 Read it as a webcomic here.

Beatrice “Bea” Whaley seems to have it all; the seventeen year old high school senior is beautiful, wealthy and the star performer of the drama club. And with her uncle’s connections to Broadway theater, the future looks bright ahead of her. Little does she know that her future might actually be brighter behind her. Bea begins having vivid dreams about a brave and handsome soldier named Alan Warren–a member of an elite group known as Knowlton’s Rangers that served during the Revolutionary War. Prone to keeping her head in the clouds, Bea welcomes her nightly adventures in 1776; filled with danger and romance they give her much to muse about the next day. But it is not long before Beatrice questions whether her dreams are simply dreams or something more. Each night they pick up exactly where the last one ended. And the senses–the smell of musket shots and cannons, the screams of soldiers in agony, and that kiss–are all far more real than any dream she can remember.

THE DREAMER turned 10 years old this Independence Day. That's 10 years of Revolutionary War nerdery and romance! Like pretty much anything having to do with American history, I have complicated feelings, but I think this comic has figured out what it is and does that pretty darn well. It's worth noting that this comic came before Hamilton, but has all the names you'd expect to see dropped, like Hercules Mulligan and Alexander Hamilton.

A time-slip story with a teenage protagonist who quite literally dreams herself into the early days of the Revolutionary War. There's a strong parallel between the literal dreaming that she's doing and the metaphorical dreaming of the rebels as they envision a future for their new country.

Peppered with references to battles, historical people of note, and uniforms/attire that much have been dreadful to illustrate, the story feels well-researched and educational as well as fantastical.

The romance is confusing at times, as Beatrice doesn't remember the life she had in the past, or her relationship with Alan, just that some part of her loves him. She tries to stay interested in present-day Ben, but it's hard for her to do so when she's visiting another man every night in her dreams. Any confusion felt by the reader is likely that of Bea, trying to sort out what she should feel and what she does feel.

A treatise on race or on the roles of free and enslaved African-Americans in the war. The heroine's best friend in the modern day story, Yvette, is dark-skinned, as is her present-day love interest, Ben. In 1776, however, we see people of color only in serving roles, and a couple as soldiers. If you're looking for a story that will emphasize the parts played by PoC in the war, this isn't the place to go.

It's also not a story in which the main character is perfect. She kind of sucks a lot of the time, to be frank. She's selfish, treats Ben, her friends, and her family poorly, and generally acts like a self-centered teenager. BUT she also appears to be growing as a person. She's realized how her actions are not only unhelpful, but pretty destructive. If you start the comic and hate her, know that she does, in fact, get better.

What made me keep reading is that this is also not a HELL YEAH AMERICA story. The characters, particularly Alan, are conflicted about the toll the war is taking on the populace. Are stamps really worth this many lives? There's very little emphasis on American exceptionalism, with more focus on liberty and self-governance.

The art is clean and beautifully colored, though some of the numerous white men in uniform eventually blur together (this may be entirely on me). I bought the first volume digitally, which was I believe 5 issues. As of 7/6/17, I couldn't buy the next volumes digital, but all three are available in print or you can do as I did and read the rest as a webcomic.

As for the research, creator Lora Innes has a "Library" tab on her site, where you can find a bunch of the research and supplemental materials she's used while creating this comic.

THE DREAMER is still running, updating 3x a week. If you're curious, A couple of issues worth of reading will give you a good idea of whether you'll like the comic as a whole.