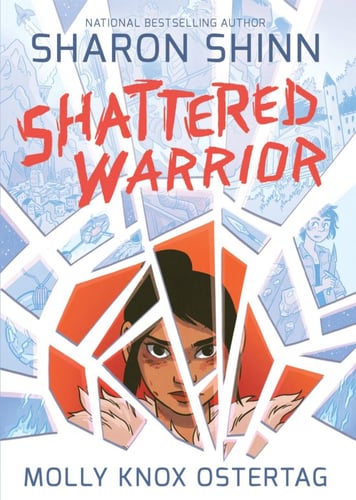 Order from your local bookstore!

Colleen Cavanaugh’s home world is ruled by Derichets, a tyrannical alien race bent on exploiting the planet’s mineral resources. Most of her family died in the war, and she now lives alone in the city. Aside from her acquaintances at the factory where she toils for the Derichets, Colleen makes a single friend in Jann, a member of the violent group of rebels known as the Chromatti. One day Colleen receives shocking news: her niece Lucy is alive and in need of her help. Shattered Warrior is a gripping science fiction adventure with a sweeping romance at its heart.

SHATTERED WARRIOR is a solidly YA graphic novel, but with lots of violence and, in Matt's words "an attempted rape scene and a boob." So, trigger warning for sexual assault and violence. (The breast in question is visible after a very subtle and consensual interlude.) All this has led to my R-rating, but I think it's totally appropriate for teens.

On to an actual review! SHATTERED WARRIOR is a modern take on classic themes of invasion, colonization, rebellion, and hope. The book includes a diverse cast, a bisexual hero, and acknowledgment of the ways in which privilege impacts our relationships and our approach to the world. Contains people doing awful things for the greater good, a good guy/bad guy in the Derichet establishment, and a heroine terrified of loving anyone (because they all die).

I picked up the book at least 90% because I love Molly Ostertag's art, so you can be sure that I found the artwork compelling. Because of the dirty, war-torn state of the humans and their environs, entire pages are rendered in shades of brown and gray. It's lovely and evocative. In her first graphic novel, writer Sharon Shinn has taken a step back and allowed panels to speak for themselves, not inserting dialogue or exposition where the setting can tell the story. It's a partnership I'd like to see more of.

Speaking of wanting more... My biggest gripe with the book is that it's one 246-page volume. The story is one of an epic struggle, and (spoiler?) ends with the beginning of a new war. I don't often say this, but I wish this was a duology or a trilogy. There aren't gaping plot holes, but certain plot points feel rushed, as does some emotional development.

Should you read it? If you want sci-fi with romantic elements and some people making hard choices and holding onto their humanity... yep. If not, I guess don't read it. I'm not really a sci-fi fan and I really enjoyed the book, however.

If anyone from First Second reads this - I would like a sequel with Lucy's story, please.