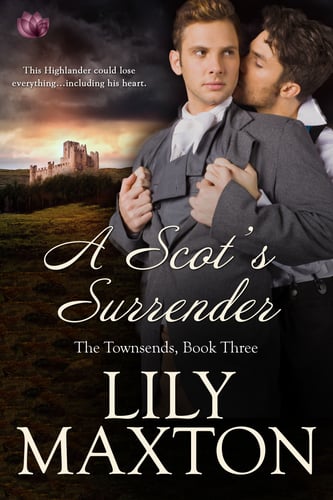 I’m really bad at positive reviews because my mind wants to shower you in glitter and confetti and what words convey that? But I’m going to try anyway because I really liked A SCOT’S SURRENDER and good books should be shared.


The story is pretty much an opposites attract story. Robert Townsend is the charming brother of an earl and sort of minding his own business at his brother’s home in Scotland, except he is distracted by his brother’s factor (property manager). Meanwhile, Ian Cameron has just lost his home in a fire and has been forced to take up residence in the castle where he’d really like to do his job in peace and be left alone, but the earl’s brother is far too charming. And then, some bad weather, intruding strangers, amusing theft, and bumbling sleuthing draw the men together.

The two men are very aware of each other and wary of the attraction they each presume is one-sided, but after some of the guests’ items go missing, they work together to clear Ian of any accusations. And it’s in that time searching the castle, suspecting the guests, and finding themselves in difficult and hilarious situations that the men become friends and move closer to each other. The romance is a slower burn, but it works. Anything faster would feel like cheating for these two who know how disparate their lives are. When they do finally give in to the attraction, the friendship and struggle make it that much sweeter.

Something that I really love in romances are when the black moments, the things that threatens to derail everything good and decent, are about the characters being good and decent. Yes, their flaws and damage brought them here, but those flaws and that damage are beautiful things that make them human. So, my heart is wrenched from me because decent people being good should get everything they want, but they need to work just a bit to make it possible. And for Robert, he has to figure out how not to take care of everyone, while Ian has to be willing to believe he won’t be abandoned. Their affection feels warm and genuine as they work to become better versions of themselves.

In spite of everything I loved, the book’s beginning has some pacing issues. While everyone is getting into place, the book drags a bit. However, after that, once Robert and Ian are together often, it was everything I needed.

This was honestly a book that made me sit for an hour on a weird day and just bask in the warmth of goodness and sweetness (I would not call this a fluffy book, though). And then, I began to berate myself for not reading Lily Maxton before this and reading the third book in a series first. So, I’ll shortly be running off to find the first two in the series.