Consent, Bodyguards, and What's Next: An Interview with Anna Zabo 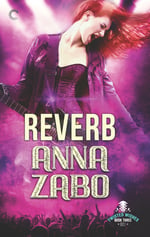 Love in Panels reviewer Alex was eagerly anticipating the third in Anna's Twisted Wishes series, Reverb, read it and loved it. We'll have his review up on release day, May 6.

In the meantime, we're so excited to share an interview with the author!

If you were to describe your Twisted Wishes series in one sentence, what would you say?

You've written lots of m/m romance, including bisexual characters. But am I correct that this is your first published title with a woman protagonist? And a trans man?

Yes, this is the first book I’ve published with a woman protagonist and with a trans main character (of any gender). Previously, I’ve struggled with writing women characters that felt like the women I knew—when I tried, the characters felt flat. I could probably write an entire thesis about why I think this happened, but in the end, it was going through my own questioning of my gender and figuring out who I was that let me be able to write rich, fully formed characters of any gender.

It probably also helped that Mish had a strong voice as a character from the minute she appeared on the page in Syncopation.

You're known for writing kink with explicit consent. How do you ensure that consent is present throughout your books while also keeping the tension and intensity in your scenes?

I think it’s easier to maintain sexual tension and intensity when bringing up consent when you normalize consent as a healthy and good part of both sex and kink. Consent is sexy, and can be part of foreplay. There’s something delicious about voicing wants and needs out loud, communicating with your partner, and negotiating exactly what want to do or have done to you.

And a question from Alex - some of David's scenes captured the awkwardness and humor around the transmasc experience, like the scene with the packer. Can you talk a bit about how you managed to make it clear that David isn't a cis guy but also make it so normal and funny? It's very much that David is a trans guy, but he's also just a guy, and you let his gender be a part of him instead of ALL of him.

Honestly, I think a lot of that comes from being transmasc myself, going through some of those awkward situations, and talking to other trans folks about our experiences, and yeah, finding some room to laugh about the ones that are funny. Everyone’s journey’s a little different. David isn’t me, but I did draw on some of the moments where I’ve either eyerolled at myself or other people over being transmasc.

The other thing is that people aren’t only their gender—even cis people. It’s an aspect of their lives, sure, and maybe a big one, but at a certain point, you’re just yourself. You’re the sum of all the things about you, and then some. 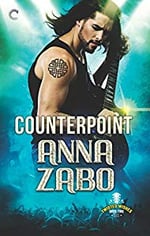 And with this book, you talk about stalking and sexism, especially about how media treats women vs men. How did you decide to tackle this issue and what did you do to make sure it was handled responsibly?

Any book about Mish was going to have to handle sexism, since it’s so baked into our society, especially in the entertainment media. It’s so apparent that men and women are treated differently, though, the media isn’t exactly kind to Ray and Zavier or to Dom and Adrian in the previous books, either. But there’s so many more expectations and assumptions with women, and being famous only shines the light hotter and brighter on that.

When I decided I wanted to do a take on the bodyguard trope, I knew that would be tricky and disturbing in places. Most of all, I wanted to give Mish agency—both to tackle and to pass on issues and information, to not have her secrets told unless she wanted them told, and in the end, she has to be the one to face her stalker, even if David is there to protect her. As she says repeatedly in the book, she can take care of herself.

As for handling it responsibly, I think anyone femme, or who has been socialized as a girl or woman has encountered obsessive unwanted attention by men, some more than others. Mish’s story isn’t mine, but it’s a story that I know on a personal level. It helped to also have an editor I trust who would tell me both when to back off a little and when to dig deeper. 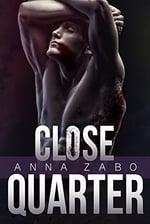 I’m working on a couple of things. I’m finally taking the time to write the sequel to my very first published novel, Close Quarter. It’s a paranormal romance that follows a fae vamprire hunter and his not entirely human lover back to New York City to face a bunch of fae politics that will change their lives even more than they’ve already been changed.

I’m also working on a proposal for the start of a series of tropey beach town romances that will feature queer protagonists getting their HEAs.

And I’m finishing up a draft of what has ended up as a longer short story for an anthology that features nonbinary and genderqueer protagonists. It’s about a nonbinary witch who encounters a mysterious man that is not at all human.

Last question! What have you read (and loved) lately?

I recently finished an ARC of Shadows You Left by Jude Sierra and Taylor Brooke, which will be out on May 20th. It’s New Adult romance between a tattoo artist and an underground cage fighter as they navigate their feelings for each other and the weight of their pasts. It’s a beautifully and carefully written book that touches on overcoming trauma, co-dependency, and learning how to live in the present.

Anna Zabo (they/them) writes contemporary and paranormal romance for all colors of the rainbow. They live and work in Pittsburgh, Pennsylvania, which isn’t nearly as boring as most people think.

Anna is non-binary and uses they/them pronouns and prefers Mx. Zabo as an honorific.

Anna grew up in the wilds of suburban Philadelphia before returning to their ancestral homelands in Western Pennsylvania. They can be easily plied with coffee.

Anna has an MFA in Writing Popular Fiction from Seton Hill University, where they fell in with a roving band of romance writers and never looked back. They also have a BA in Creative Writing from Carnegie Mellon University.

Where to Find Anna:

The tougher they are, the harder they fall.

Twisted Wishes bass player Mish Sullivan is a rock goddess—gorgeous, sexy and comfortable in the spotlight. With fame comes unwanted attention, though: a stalker is desperate to get close. Mish can fend for herself, just as she always has. But after an attack lands her in the hospital, the band reacts, sticking her with a bodyguard she doesn’t need or want.

David Altet has an instant connection with Mish. A certified badass, this ex-army martial arts expert can take down a man twice his size. But nothing—not living as a trans man, not his intensive military training—prepared him for the challenge of Mish. Sex with her is a distraction neither of them can afford, yet the hot, kink-filled nights keep coming.

When Mish’s stalker ups his game, David must make a choice—lover or bodyguard. He’d rather have Mish alive than in his bed. But Mish wants David, and no one, especially not a stalker, will force her to give him up.