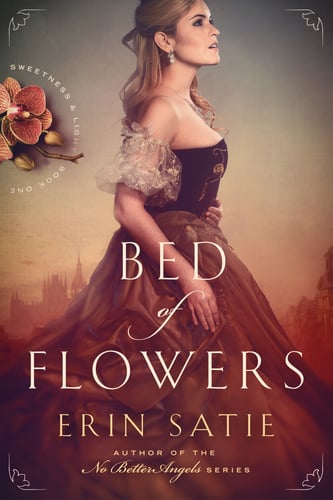 When Charles Gavin finally proposes to Bonny, she couldn’t be happier. The marriage will mean the end of her family’s financial difficulties since he promises to support them after the wedding. She is so happy that she doesn’t even mind that his proposal boils down to “I looked for a woman that was beautiful and rich but couldn’t find one so one who is just beautiful will have to do.” Only when Baron Loel hints that Gavin has a dark secret she starts wondering if she made the right choice. And when she develops feelings for Loel she never had for Gavin she wonders even more. But it’s not just her family’s fortune that’s at stake: Loel is the reason her family lost their fortune in the first place.

Bonny is a really charming heroine. She loves books and while it can be a rather cheap trick to have a bookworm character in a novel it's not just used as a throwaway character-trait here. Bonny and her friend have a traveling library that both clearly care a lot about and the library is also an integral part of the plot.

Loel is a brooding hero but only in limits that are understandable once you learn more about him. He also does some very swoonworthy speeches and love declarations.

Unfortunately, the charming couple couldn’t help the fact that I came to this book with the wrong expectations. The blurb made me think most of the conflict would be internal: Bonny who feels it is her duty to make an advantageous marriage but growing to despise the man who would offer that while developing feelings for the man she is supposed to despise.

That alone would be enough for one book (especially with Gavin taking the rejection not well) but in Bed of Flowers much more happens. Things keep happening exactly then when they have the most dramatic effect (positive or – more often – negative) and Bonny had to deal with the fallout from those events.

Now I don’t mind some drama in my romances but the keyword is some. Here things just kept happening at a speed that I found borderline ridiculous. Additionally, that meant that there was little time for Bonny to deal with her feelings. Her decision to reject Gavin looks more like a spur of the moment whim than something she struggled over for a considerable amount of time. Because in-between saving people from drowning and meeting rich heiresses it barely gets mentioned. And the fact that Loel is the reason her family lost their fortune in the first place also seems not a big deal to her. Now to be clear: it was an accident (he stumbled, dropped a lamp that caused a huge fire that destroyed her family’s warehouses) but for me, there is still a difference between accepting that somebody caused me pain without being at fault and spending the rest of my life with that person. I expected her to struggle more with this issue.

I still think others might enjoy this book more than I did. I didn’t think any of the single things that happened were over the top, just the mass of them annoyed me, especially since I had expected something very different. If you like a bit more drama in your romances, the book could be for you.

Warnings: Early in the book Gavin asks to kiss Bonny to which she agrees but quickly realizes that she doesn’t enjoy it but he ignores her cues. Nothing more happens and the scene is not long but quite detailed.