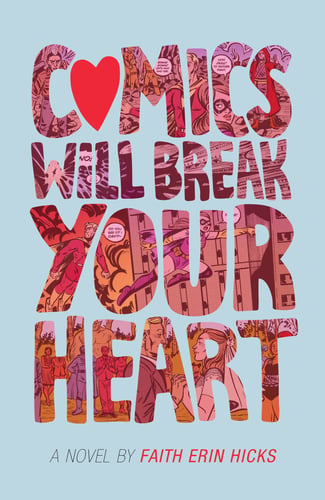 A sweet, funny contemporary teen romance for the inner geek in all of us from graphic novelist Faith Erin Hicks.

Miriam's family should be rich. After all, her grandfather was the co-creator of smash-hit comics series The TomorrowMen. But he sold his rights to the series to his co-creator in the 1960s for practically nothing, and now that's what Miriam has: practically nothing. And practically nothing to look forward to either-how can she afford college when her family can barely keep a roof above their heads? As if she didn't have enough to worry about, Miriam's life gets much more complicated when a cute boy shows up in town . . . and turns out to be the grandson of the man who defrauded Miriam's grandfather, and heir to the TomorrowMen fortune.

In her endearing debut novel, cartoonist Faith Erin Hicks pens a sensitive and funny Romeo and Juliet tale about modern romance, geek royalty, and what it takes to heal the long-festering scars of the past (Spoiler Alert: love).

Review: Comics Will Break Your Heart, by Faith Erin Hicks

Comics Will Break Your Heart is a Romeo & Juliet-style young adult romance that features the youngest generation of two feuding comics families. Miriam's mother settled the big lawsuit case years ago, after her father died, but now the TomorrowMen franchise is massive and has spawned a sure-to-be-huge live action film. Miriam is resentful, even before the scion of the Warrick family, Weldon, shows up in town for the summer. Weldon has been sent back to his father's hometown so as to "not be a distraction" to his father.

As you might expect, both kids have baggage they need to unpack. This worked well as a coming-of-age story, even if there was honestly not much of the "two rival houses" conflict that I was expecting. Miriam's mom is very chill and loves to paint and Weldon's dad is the stereotypical industry bigwig who's lost the soul of the comics. If the two of them had been the romantic pairing, I would have expected more fireworks.

As it was, the story unfolds in a somewhat sleepy, somewhat angsty way, with more focus on the themes of money-can't-buy-happiness and be-grateful-for-what-you-have than I expected. Miriam's BFF's boyfriend is a total jerk to her, in no small part because he sees that her mom paid off their mortgage with the settlement and he thinks her financial woes are trivial. He may have a point, but so does Miriam. Weldon came off as a sad little rich kid and I had a hard time feeling sorry for him, especially since we first meet him when he's just stolen a car. There's no discussion of the fact that since he's a rich white kid, he gets away with this crap.

Overall, I'm glad I read the book. I've loved Faith Erin Hicks's comics for years, and I genuinely enjoyed all the comics nerdery in this novel. It works well as a coming-of-age story and as a romance, but it isn't quite the feud I was expecting.

I received a copy of this book from the publisher via NetGalley for review.