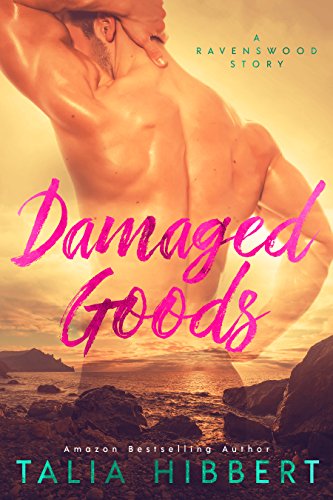 They fell in love fifteen years ago, and never quite fell out again…

Laura Burne arrives in Beesley-on-Sea searching for peace, happiness, and safety—not for the teenage sweetheart she left behind. And yet, one moonlit night on the beach, she finds him anyway.

Samir may be a man now, but he's still sexy as sin, still sweet as pie, and still determined to take care of her. The problem is, while he's remained the same, Laura’s life is forever changed—and not just by the unborn child she carries.

She’s on the run from her own personal monster. Her baby’s father. Her husband. There isn't a man alive who'd take on those complications. So Laura has to remember that just because Samir protects her, and makes her smile, and watches her with something close to hunger in his eyes, it doesn't mean he wants her...

Which is a shame. Because, against all reason and all goddamn common sense, Laura just might want him.

Damaged Goods is an interracial romance starring a white heroine and a Moroccan-Italian hero. Though it can be read as a standalone, the author recommends reading book 1, A Girl Like Her, first. This story is 40,000 words of sweet, angsty, red-hot, second-chance romance. There is NO love triangle and a guaranteed HEA! Please note: this book contains descriptions of domestic abuse, intimate partner violence, and child abuse that may trigger some readers.

Talia Hibbert blends heart, humor, and heat together to create a second chance romance that makes you believe first love can be lasting love, and even the bumpiest of roads can lead you home.


“Laura was working on her character flaws—mothers, she had decided, should be flawless—and one of the biggest was a tendency towards self-indulgence. Or, as her sister put it, being a right miserable cow.”


After the events in the first book of the Ravenswood series, (A Girl Like Her), Laura Burne is in a state of transition. Pregnant and determined to put distance between her, her unborn child, and her abusive husband she runs to idyllic seaside town of Beesley-on-Sea. All she wants is peace, quiet, freedom from Daniel, and a chance to make remake herself into a proper mother before her child’s birth. Laura plans on spending the rest of her pregnancy in her childhood beach house rebuilding herself and her life. Unfortunately for Laura, she didn’t plan on Samir Bianchi.


“When she laughed, something inside him slotted into place. As if making her laugh was part of his life’s work, somehow. As if this was what he should’ve been doing all along. Maybe it was.”


Samir Bianchi fell in love with Laura when he was fifteen and the moment she shows back up in his sleepy little seaside village it’s clear he never fell out of love with her. Samir’s a man who has his own painful past and he recognizes and respects Laura[‘s need for both safety and privacy. Instead of questioning her circumstances he makes it his mission to help Laura settle in and support her as she rediscovers Laura Albright and sheds the skin of Laura Burne.


“If Laura was her old self, Daniel’s Laura, she’d say that the woman’s over-bleached hair looked like straw and the turquoise eyeliner bleeding into her crow’s feet were giving her Braveheart vibes. But Laura was herself now, not some pathetic, wounded creature lashing out at anyone who passed by, wielding preemptive cruelty as a shield.”


In A Girl Like Her, all we know about Laura is that she’s married to Daniel, mean to Ruth (the heroine of A Girl Like Her), and something in the buttermilk of the Burne marriage ain’t clean. In Damaged Goods, it becomes heartbreakingly clear Ruth wasn’t Daniel’s only victim. Through nightmares, flashbacks, and conversations with Samir and her sister, we discover the extent of Daniel’s abusive behavior and gain insight into why “Daniel’s Laura” was the way she was.

By contrast, when we see her with Samir we get to see who Laura was before Daniel and who she wants to be after him. She’s snarky and sarcastic, but not cruel. She’s stubborn and determined, but not too prideful to accept help when she needs it. She’s funny and flirty and appreciative of things that money can’t buy. Laura reveals herself as she heals herself and she’s so endearingly earnest in her efforts you can’t help but cheer her along.


“Good. I want to complicate things with you. I want us tied together in a knot so indecipherable, people would look at us and wouldn’t be able to imagine how we’d ever come apart.”


The romance between Laura and Samir is a perfect blend of old feelings and new discoveries. Samir doesn’t see Laura’s pregnancy or her circumstances as an obstacle between them and never treats her like a problem he needs to solve. He’s supportive in all the best way, telling Laura and showing her with kindness and consistency, how much he wants her.

And he truly does want her. The attraction between them burns hot and the chemistry is sizzling. Samir isn’t attracted to Laura despite her pregnancy (or because of it), he’s just attracted to Laura. He wants her and he lets it be known how sexy he thinks she is. Laura wants to ride Samir like Seabiscuit and when she finally saddles up...holy hotness, Batman!

Talia Hibbert has a knack for writing heroes who are heroic without having to strut about beating their chests and proclaiming themselves King of Alpha Male Mountain. Samir is the epitome of this. He’s strong, he’s sure, he’s supremely confident, competent and yet he has no problem letting Laura set the pace and take the lead because he knows that’s what she needs. Another of Talia Hibbert’s strengths is writing heroines who save themselves and nothing showcases this better than the eventual showdown between Laura and Daniel.

Damaged Goods is a definite “read right now” and I adored it. It is a stand alone but I’d advise reading A Girl Like Her to truly appreciate the full scope of the story and understand the relationships/characters referenced. Those of us who read A Girl Like Her get to squee and flail when Ruth and Evan make an appearance and there’s even an adorable epilogue that ties everything up in a pretty little bow. If you’re a romance reader who likes realistic romance, supportive heroes, and heroines who slay their own damn dragons, Damaged Goods is the book for you.