Exclusive Excerpt: Out of Nowhere, by Felicia Davin

Last year Veronica Scott gave Felicia Davin's Edge of Nowhere a glowing recommendation, so when we heard that the second in the Nowhere series was coming out this December? Yeah, we were interested. *eyeballs emoji*

The books are (so far) m/m sci-fi romance and both follow a different couple.

Today we've got an exclusive excerpt for you, plus content warnings and tags courtesy of the author!

About Out of Nowhere:

Aidan Blackwood barely survived an unethical experiment by Quint Services. Researchers there robbed him of his ability to access the Nowhere, a void between worlds that allows him to teleport. Aidan plans to destroy the company and the man behind it, trillionaire Oswin Lewis Quint.

The problem? Aidan’s childhood best friend Caleb is the one who rescued him. Aidan’s spent years distancing himself from Caleb. It’s the only way to protect him from the dangers of Aidan’s life as a Nowhere runner—and the only way for Aidan to protect his fragile heart from unrequited love. Now Caleb is inextricably involved in Aidan’s most dangerous plan yet. Aidan’s already lost his power. He can’t lose the person he cares about the most.

Caleb lied his way into a secret Quint Services facility to rescue his best friend. He won’t be shut out of Aidan’s life now, even if it means risking his own life in Aidan’s wild scheme for revenge. As they pit themselves against a ruthless, corrupt trillionaire, Caleb worries that his unexplored feelings for Aidan might be love—and that he might not live long enough to find out.

Warnings: main character subjected to a horrific science experiment prior to the story (experiment includes starvation, violation of bodily integrity), minor physical violence, two in-story instances of non-consensual sedation, mentions of needles, murder, explicit sex, prejudice (against people who can teleport, mostly), mention of the death of a parent 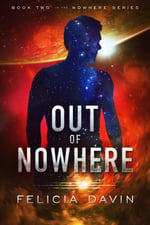 Out of Nowhere releases on December 2nd!

Minor context: This is a scene from the middle of the book in which the two protagonists, Aidan and Caleb, unexpectedly get interviewed on a live broadcast. It marks the introduction of one of my favorite tropes :)

They sat close in the small space, made smaller by the camera pointed at them.

“But the story is true?” Miss Tallulah asked. “You really left your entire life behind to go search for Aidan in space?”

“Yes,” Caleb said. “I just wanted to clarify that I had help.”

That was the only clarification he wanted to make? Not “we’re not actually in a romantic relationship, just very good friends”? Trapped, Aidan sat still and silent, clenching his fists under the table.

Caleb laid a hand on his shoulder. It was exactly the kind of comforting touch he might have offered in private. Now there was a camera on them, and Aidan couldn’t trust it.

“Aidan doesn’t usually stay in the spotlight for more than a few seconds at a time,” Caleb said to Miss Tallulah, a wry allusion to Aidan’s past. It was a bad idea to bring it up. People would remember they hated Aidan.

But Caleb gave her one of his dazzling smiles and she returned it, then said, “I’m so happy the two of you have found each other. Tell me, what made you go to such lengths?”

“I knew I couldn’t live without him.”

It had the ring of truth when Caleb said it. It didn’t sound at all like he was playacting some grand love story for an audience, and yet a knife twisted in Aidan’s gut. Why had Caleb put in such an effort to save him? They had a lasting friendship, sure, but Aidan had been a shitty friend in the past few years. Why hadn’t Caleb given up on him?

Caleb pressed his thigh into Aidan’s. Under the table. Where no one could see.

Aidan met his eyes. Caleb’s gaze had some urgency to it, but the message was indecipherable.

Caleb took his hand and put it on the table. Right. Okay. A public display of affection. They needed to be convincing. Their romance had convinced a heartless trillionaire to give up his evil schemes and set out on the path to redemption. If a little fake handholding was all it took, Aidan could do that.

Caleb stroked his hand over Aidan’s, a quiet show of comfort and intimacy. There was no such thing as fake handholding. Either you were holding someone’s hand or you weren’t.

He smiled, because no matter the circumstances, looking at Caleb made him want to smile.

It would be so, so easy to let himself believe this was real.