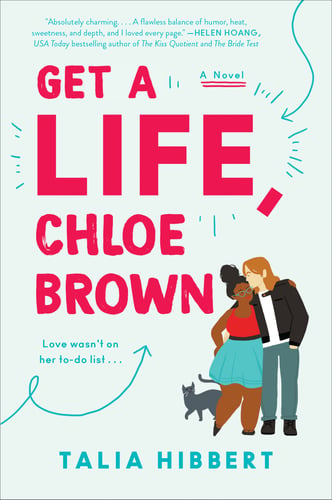 “Absolutely charming... a flawless balance of humor, heat, sweetness, and depth, and I loved every page.” – Helen Hoang, USA Today bestselling author of The Bride Test

Talia Hibbert, one of contemporary romance’s brightest new stars, delivers a witty, hilarious romantic comedy about a woman who’s tired of being “boring” and recruits her mysterious, sexy neighbor to help her experience new things—perfect for fans of Sally Thorne, Jasmine Guillory, and Helen Hoang!

Chloe Brown is a chronically ill computer geek with a goal, a plan, and a list. After almost—but not quite—dying, she’s come up with seven directives to help her “Get a Life”, and she’s already completed the first: finally moving out of her glamorous family’s mansion. The next items?

But it’s not easy being bad, even when you’ve written step-by-step guidelines on how to do it correctly. What Chloe needs is a teacher, and she knows just the man for the job.

Redford ‘Red’ Morgan is a handyman with tattoos, a motorcycle, and more sex appeal than ten-thousand Hollywood heartthrobs. He’s also an artist who paints at night and hides his work in the light of day, which Chloe knows because she spies on him occasionally. Just the teeniest, tiniest bit.

But when she enlists Red in her mission to rebel, she learns things about him that no spy session could teach her. Like why he clearly resents Chloe’s wealthy background. And why he never shows his art to anyone. And what really lies beneath his rough exterior…

Review: Get a Life, Chloe Brown, by Talia Hibbert

In Hibbert’s first traditionally published romance, she continues to highlight prickly heroines and the sweet heroes who are determined to love them. Although I only had a mild appreciation of her novellas I found myself loving this novel wholeheartedly, more than living up to the anticipation and hype. The novel felt fully satisfying and complete, establishing, building up and then resolving a full story. Hibbert's use of situational humor and word play cushions the heavy themes she addresses in this story such as ableism, abandonment, domestic abuse and mortality.

In Get a Life, Chloe Brown, Chloe and Red are both recovering from their own traumas, Chloe re-learning to have a full life after drawn out and difficult diagnosis of Fibromyalgia and Red from the end of abusive romantic relationship. Hibbert focuses on their journeys toward greater self-realization and agency, and learning to build boundaries while accepting love and support.

The climactic conflict felt organic and inevitable, growing from both their insecurities and soft spots.

The audio narration by Adjoa Andoh was fun and engaging. I particularly enjoyed the distinction between Red’s gruff working class accent and Chloe’s posh and prim accent. Andoh also did a great job contrasting Red and Chloe’s effusive inner monologues with their more restrained and terse dialogue, which built on the way Hibbert used that gap to develop their characters and show just how much both are working to protect their fragile hearts. Hibbert skillfully uses what isn’t said, what is misunderstood, what is assumed to build natural conflict between Red and Chloe and lead naturally to the resolution of it too. My only complaint is that a lot of fantastically interesting supporting characters such as Chloe’s pushy Caribbean extended family faded to the background midway only to roar back near the end and play a pivotal role in the conflict.

Hibbert continues to prove with Get a Life, Chloe Brown that crafting romance novels with deeply layered representation (race, class, identity, disability and trauma) that are also funny and a joy to read/listen is possible. I am now eagerly anticipating the next book in the series with Chloe’s bossy big sister Danni and once you read Get a Life, Chloe Brown, I am sure you will be too.

Ana received an audio copy of this book for review via Libro.fm