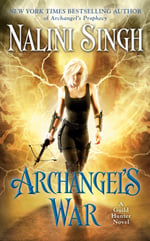 One of my gateways to romance was Nalini Singh’s Psy-Changeling series, but for years I have told myself that her Urban Fantasy Guild Hunter series was simply just not for me. Too much blood, horror and war. But last month the only books I could seem to finish were Guild Hunter books, so maybe there is just a time and mood for everything. Archangel’s War, book 12 in this series, just came out and in it Nalini Singh closes out one of the major story arcs in her series, making it an excellent time to catch up with Singh’s Vampires, Angels and Hunters and come along on a wild ride.

The World of the Guild Hunters is one ruled by a Cadre of super-powerful Archangels. These nearly immortal winged beings rule portions of the Earth for millennia. Below them are Angels who oversee the large ranks of vampiric servants. Angels can grant near immortality through Vampirism to humans who apply for the opportunity. The human selected must enter into servitude to an angel for 100 years. Under the contract vampires have very few rights and are at the mercy of their governing angel’s whims and wips. Humans in this world live short, vibrant lives that are often almost baffling to the long-lived vampires and Angels for whom immortality has distanced and often robbed them of empathy and compassion.

The first three books in the series center on Raphael and Elena. Elena is a vampire hunter, born with the special ability to scent vampires, she works for the Guild, specially trained humans who are essentially bounty hunters. Hunters are tasked with tracking and bringing back vampires that have run away from their angelic masters. Raphael is the Archangel of New York and oversees North America. He takes an unlikely and dangerous interest in Elena when she is tasked on tracking a blood-crazed killer abducting and dismembering human women. 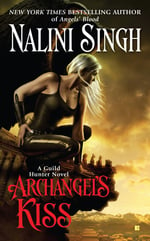 In their romance Singh must negotiate the huge power imbalance between them and bridge their wildly differing life experiences. While their relationship starts off antagonist, they are soon grudging partners, eventually growing to not just be attracted to each other but respectful of each other’s gifts, powers and responsibilities.

Both Raphael and Elena are surrounded by an ever expanding group of friends that have become like family to them. The found family, complicated parental relationships and the imprints of trauma survival are recurring themes in the series, playing out in the romances between many of the supporting characters. Through their three books, their romance overcomes several deadly encounters and matures into a devoted fully committed relationship, although their lives are often under threat throughout the whole series. 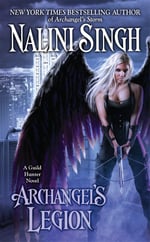 Singh expands the Guild Hunter world with each book, many of them featuring Raphael’s Seven, his loyal and most trusted friends and/or Guild Hunters known and loved by Elena. Through their romances we learn crucial world history, deepen our knowledge of the world from the dark underbelly of drug dealing and drug taking Angels and vampires to the opulent and secretive courts of the other Archangels in the Cadre.

The overarching story of the first 12 books in the Guild Hunter series is about the Cascade, a chaos-creating energy wave that has gifted many angels and archangels with new and unpredictable gifts. The surges of power are destabilizing the Cadre’s dynamics as some of the members become consumed by their deadly new powers. Elena and Raphael work to navigate the dangerous politics and try to uncover the Cascade’s end game, while trying to protect their people and the world from world-eating death. Singh weaves stories of individual joys and sorrows in the midsts of world-wide near cataclysm, never forgetting that in the midst of the grand-scale of invasions and war, there are personal losses and glories. 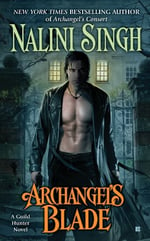 For all the beauty of the Angels and Archangels with its soaring spires and gorgeously colored wings, the world of the Guild Hunter books in not an idyllic one. I actually DNF the fourth book, Archangel’s Blade, now one of my favorites in the series the first time I tried to read it. The might makes right, casual cruelty and easy violence of the beings in power was just too much to bear when my heart was already bruised by the news. However when I returned to the books I found comfort in the justice and truth sought by Elena and her fellow Guild Hunters, the moments of compassion and unlikely love, that is not limited to the headlining romantic protagonists but present for many of the secondary characters in the series.

I’m glad I got to soar with Raphael and Elena and I hope that you enjoy their dark journey too.