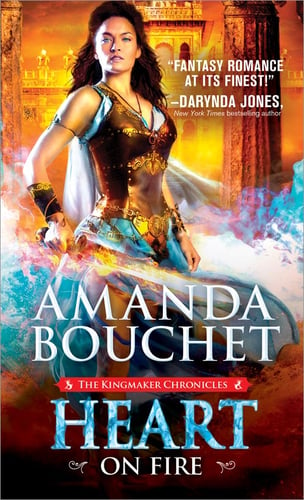 GODS. I’M AN IDIOT. Without Griffin—and apparently a few meddling Gods—to push me along, I’d still be telling fortunes at the circus, lying about my past, ignoring my future, and living as far away from my tyrant mother as humanly possible.
True understanding thuds into place. Hope isn’t just an abstract concept; it’s me. Flesh and blood me. Griffin knew it all along. Probably everyone did. I’m an idea in human form.
I have the power of the Gods at my fingertips. The only thing ever stopping me has been me.

USA Today bestselling author AMANDA BOUCHET grew up in New England and studied French at the undergraduate and graduate levels, first at Bowdoin College and then at Bowling Green State University. She moved to Paris, France, in 2001 and has been there ever since. She met her husband while studying abroad, and the family now includes two bilingual children, who will soon be correcting her French. Connect with her at www.amandabouchet.com.

The third and final book in Amanda Bouchet’s Kingmaker Chronicles, HEART ON FIRE, comes out today. (January 2, 2018) Since it’s the series finale, it’s virtually impossible to write this review without spoilers for the previous books, but I am going to try my very darndest. To that end, I have composed a list of five things I think readers should know about HEART ON FIRE. Here goes.

The Women (and there are many) are Badass

If you put a book up to the Bechdel test, this would pass with flying colors. In addition to Selena (her healer friend from the circus) and Griffin’s sisters, Cat added another two women to her family in the second book, BREATH OF FIRE. Bellanca, a princess in her own right, is a fire mage and pretty much my favorite character in the series. She’s prickly and intense, never hesitating to call out her companions for their nonsense. She’s also a source of comic relief at times, often batting at her flaming hair or “accidentally” hitting Carver. Ianthe, Cat’s sister, is a water mage and possesses the same sort of compassionate strength that makes Cat so heroic. (She gets a bit of her own HEA and I would like their book now please and thank you.)

Then there’s Cat. She’s a bit of a Mary Sue, designed to be such, but also… not? In all three books, Cat messes up with surprising frequency. The number of times she nearly dies or is bleeding, broken, or otherwise impaired is impressive. Bouchet really puts her through it. As with the other novels in the series, this book is about Cat finding her strength. Not strength despite adversity, but because of it. In this novel, Bouchet gives us women to admire, to emulate, to want to be friends with.

Bouchet Amped Up the Godsauce

“Suzanne, what is godsauce? It sounds dirty.” Godsauce is my way of saying “crazysauce but with Greek gods.” Bouchet packed this book full, moreso than the previous two, of gods, goddesses, and mythical figures and places. I can’t give you too many details without spoiling the book, but let’s say you could draw a chart that shows godsauce and romance over time. As the series progresses, godsauce rises and romance decreases.

You May Miss the Romance

Which brings me to my next point - the romance is probably lacking if that’s what you’re after. While I appreciate that Bouchet shows Cat having a physical relationship with her husband and fighting her ass off while pregnant, there’s no denying that this is more of an epic fantasy novel and less of a fantasy romance. Cat and Griffin’s relationship was thoroughly solid early into Book 2, and I think I would have resented it if Bouchet continued to make them doubt each other. Their love and the strength they both take from that love is still a driving force, however. (And Bouchet gives us a couple of secondary romances as well!)

If you ever need to read a story about strength and triumph over adversity, here’s a book for you. Cat’s put through just about every possible emotional and physical challenge and, through it, finds a path forward that works for her. It doesn’t have to make sense to the rest of the characters, but it’s the only way she can maintain her core values and also save Thalyria. Hope is such a strong characteristic of this book that I would have no problem describing it with just that single word. For example, this line:

“Compassion and ruthlessness have always danced around each other inside me like wary partners, but I know the music they spin to, and I’d rather have a heart to break than no heart at all.”

Matt Swore About the Ending (But I Didn’t)

Originally, Matt and I were going to do a joint review for this book, both of us offering our thoughts. However, he read the book start to finish as soon as he got his hands on it (months ago) and I chose to put it off and savor the last book in this brilliant series. The end result is that I’m writing this review with just my opinions, with one caveat - the ending. Matt wanted the ending to go a different way, cursing a bit about it. I had the opposite reaction. I was wondering how Bouchet could possibly reconcile the inevitable defeat of Cat’s mother (the Big Bad) with the recurring motifs of hope and goodness. I was quite happy with the way things turned out.

If you don't have a copy yet, purchase links are with the synopsis above. Please come back and let me know your thoughts when you’ve finished!