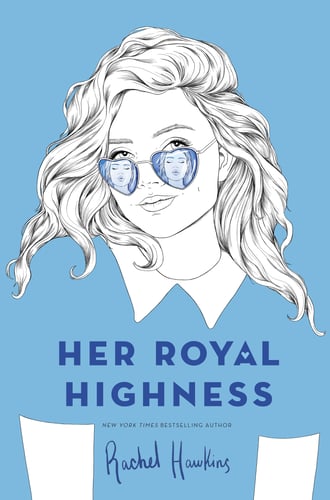 Millie Quint is devastated when she discovers that her sort-of-best friend/sort-of-girlfriend has been kissing someone else. Heartbroken and ready for a change of pace, Millie decides to apply for scholarships to boarding schools . . . the farther from Houston the better.

Soon, Millie is accepted into one of the world's most exclusive schools, located in the rolling highlands of Scotland. Here, the country is dreamy and green; the school is covered in ivy, and the students think her American-ness is adorable.

The only problem: Mille's roommate Flora is a total princess.

At first, the girls can't stand each other, but before Millie knows it, she has another sort-of-best-friend/sort-of-girlfriend. Princess Flora could be a new chapter in her love life, but Millie knows the chances of happily-ever-afters are slim . . . after all, real life isn't a fairy tale . . . or is it?

For a book that pretty much opens with heartbreak, Her Royal Highness is a fairly low angst young adult romance, which means it’s totally my speed. And the charm of the book rests in how Millie (a scholarship student from Texas) and Flora (the Scottish princess) reveal their weaknesses and hurts to each other to become both friends and girlfriends.

Her Royal Highness is an enemies-to-lovers story, but I have also spent the last hour debating if it is also a friends-to-lovers story (I say it is). Because for all that Her Royal Highness is a teen romance, it is also a story about friends and finding your people, and maybe recognizing toxic relationships too. While we typically require friends-to-lovers to start with the two characters as friends, I think that the friendship that builds between Millie and Flora is just as important as the romance. The friendship means most to Flora who, as a princess, has doubted the motives of others before.

And not that you’re curious, but my favorite part about enemies-to-lovers romances is the moment when things change. I crave that moment when someone breaks open their heart a little and the other gets to see a well-concealed truth that alters perspectives. And while that moment in Her Royal Highness is subtle, you also can’t miss how important it is. Not even Millie recognizes the moment when Flora really sees her, but it is what allows Flora to maybe try to let Millie in.

My one complaint is that I would not have minded more development of the relationship between Millie and Flora, or maybe just more time for them to be together before everything falls apart. It’s not rushed, but there’s so little time of them being a couple before they have to deal with the bleak moment.

An important thing to note is that this book does include a forced outing of sorts. I say “of sorts” because Millie is out to her friends and family and Flora is out to her family and very select friends, but when photos of them sitting together and kissing are published in a tabloid, Flora is effectively outed to the world. Except this is something that Flora has wanted. She didn’t want to be in the closet; her mother, the queen, did. So, these photos are freeing for Flora.

I thoroughly enjoyed this cute f/f YA romance. I’ve even been tempted to re-listen to the audiobook for a guaranteed smile.