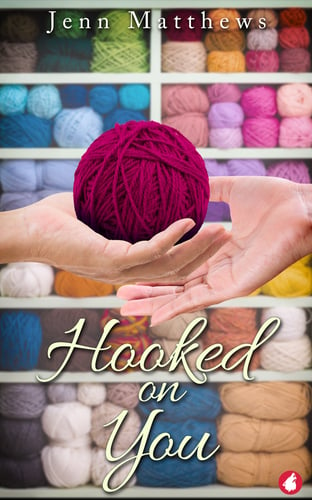 Anna’s life’s in a bit of a rut. As a teacher with two great kids and a boyfriend, she seems to have it all. Except…she’s bored as hell. Perhaps a new hobby’s in order? Something…crafty?

Divorced mother and veteran Ollie has been through the wars, emotionally and physically. To relax, she runs a quirky crochet class in her London craft shop. She can’t help but notice the attractive, feisty new student. A shame Anna’s straight as an arrow.

But somewhere between the chain stitches, doubles and trebles, Ollie and Anna form a powerful connection they never expected.

A quirky lesbian romance about love never being quite where you expect.

Review: Hooked on You, by Jenn Matthews

Hooked on You is a mostly cute romance with a few choices that are complicated. The book is largely about two women in their 50s discovering that their sexualities are not as clearly defined as they thought for most of their lives. And it’s tricky telling a story like this because it can so easily come off as the cringey “gay for you” trope and wildly biphobic, but I think Matthews pulls off the exploration of sexuality well.

There is very little conflict, angst, and plot to the story. Instead, this is a romance that focuses on the two characters finding each other and learning about themselves. For a significant part of the book, Anna identifies as straight and it is through her new friendship with Ollie that develops into attraction that she realizes she is bisexual. And when she kisses Ollie for the first time, she knows who she is even as she is still working through her new feelings.

In some ways, the book is also about the relationships these two divorced mothers have with their kids. Anna’s family is warm and supportive, even if her relationship with her ex-husband is strained. While Ollie’s kids are struggling to accept that Ollie cheated on their father with a woman and later came out as a lesbian.

My biggest concern was how the book dealt with Anna’s boyfriend (while they are involved). It is clear from one fact that he’s a horrible person, but it falls into a thing common in lesfic where men (especially exes) are often horrible villains (I’m not exactly complaining about that). My concern is that Anna’s adopted son is neurodivergent (likely autistic, but I don’t believe it is ever said) and the boyfriend is repeatedly cruel to him including repeatedly using a slur. Was it an effective way to show that he’s horrible? Yes. Could it have been done in a better way that wouldn’t possibly hurt readers? Yes. Add to this the fact that Anna doesn’t dump him the first time he does this; she excuses his behavior repeatedly until her daughter demands that Anna do better.

This is not the most dramatic of romances, but it was a predominantly gentle one that was easy to listen to and mostly enjoy (when Anna’s ex-boyfriend wasn’t present or mentioned). Oh, and there’s tons of crocheting.

Content warnings: repeated use of r*tard, opens with a school in Iraq being bombed, past infidelity, strained relationship with kids, divorced families, sad backstory for the neurodivergent character

Margrethe borrowed the audiobook from Hoopla.