Friendship, Xena, and Toronto: An Interview with Jenny Holiday 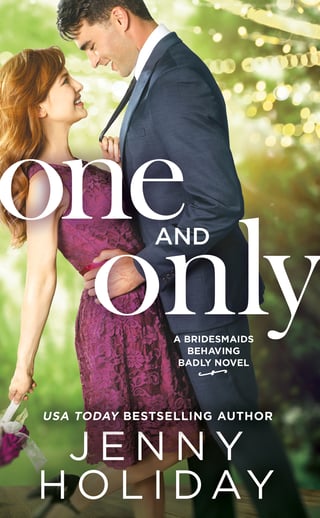 Jenny Holiday's latest book, ONE AND ONLY, starts a new series called Bridesmaids Behaving Badly. I loved it, so we asked Jenny to stop by and tell us a little about the book, what's next, and what she's been reading!

Jane is a YA fantasy author and she cosplays Xena at one point in the book. (Cam makes her a chakram and hearts all over the fandom explode with joy.) Why does Jane love Xena?

I think it’s because Jane was a geeky kid who lived inside her head. She would have grown up before Wonder Woman and Ghostbusters and all that, so she would have gravitated toward Xena naturally, because Xena was one of the early female ass-kickers in pop culture. But more than that, because of a family tragedy, Jane cast herself at a very young age as the good girl who shied away from risk and didn’t rock the boat. So she lives through Xena, in a way.

Really, it was as simple as me wanting to have the groom’s brother suddenly be attending the wedding when he hadn’t been planning to before. I also wanted him to be a classic bad-boy hero. So the “hi, I’m suddenly unexpectedly back from the military” thing fit the bill. I did think about having him be discharged because of an injury, but I thought that would almost be too easy. He is a bad boy, a person who has struggled with his role in the world.

Actually, I haven’t really suffered as a bridesmaid! I’ve only been in a few weddings, and the brides were not at all like Elise. But I have certainly observed the rise of the wedding-industrial complex and with it, the rise of the bridezilla. On the one hand, I wanted to poke fun at all this. But I also wanted to balance this with the idea that female friendships are strong and resilient. They can endure a lot if you are willing to roll with the punches that the different stages of life bring. Even though these are wedding-themed romance novels, I hope one of the overall themes of the series is "sisters before misters." What keeps these friends together is the fact that they know that Elise’s bridezilla-itis is temporary. They also genuinely want her to have the wedding of her dreams. (And also they have each other to vent to!)

The book takes place in Toronto, Ontario. Since you live in Ontario and several of the landmarks in the story (and the shenanigans at them) feel quite realistic, I have to ask - was that you on the CN Tower? Did you do a bunch of fun things "for research" or are these completely made up?

I did go up the CN tower to check things out in a general sense, but I did not dangle off the side of it—no, thank you! Thankfully, we live in an era where you can experience almost anything firsthand through YouTube. All the adventures Jane and Cam embark on are real, but most of them I experienced through the filter of the internet, because I am a scaredy-cat.

What can we look for next?

Book 2 of Bridesmaids Behaving Badly (called It Takes Two) is out June 26. Then I have a book coming out from Riptide Publishing in October called Undue Influence. It’s a modern m/m retelling of Jane Austen’s Persuasion, and it’s part of Riptide’s Classics Queered series. Then it’s back to the bridesmaids for a novella and a third full-length novel.

Santino Hassell’s Down By Contact. I am a big fangirl of Santino’s to begin with, and enemies-to-lovers is my absolute, all-time favourite trope. What’s kind of amazing about this series is that I have zero interest in football in real life, and yet… I was supposed to be doing my RITA award judging when this book came out. I’m a slow reader, so RITA judging always takes all the time that I’m allotted for it, so I have to put my regular reading on hiatus during this time. I bought this book and thought, “Okay, well, I can’t resist just taking a peek. I’ll just read the first chapter.” And then it was, "Okay, I'll just read as long as I can tonight, and put it aside tomorrow."  Well, you can imagine how that ended!

You can check out ONE AND ONLY here!