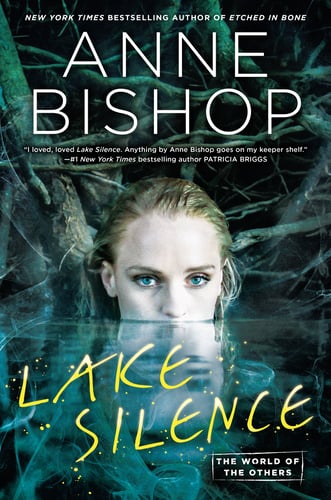 In this thrilling and suspenseful fantasy set in the world of the New York Times bestselling Others series, an inn owner and her shape-shifting lodger find themselves enmeshed in danger and dark secrets.

Human laws do not apply in the territory controlled by the Others--vampires, shape-shifters, and even deadlier paranormal beings. And this is a fact that humans should never, ever forget....

After her divorce, Vicki DeVine took over a rustic resort near Lake Silence, in a human town that is not human controlled. Towns such as Vicki's don't have any distance from the Others, the dominant predators who rule most of the land and all of the water throughout the world. And when a place has no boundaries, you never really know what is out there watching you.

Vicki was hoping to find a new career and a new life. But when her lodger, Aggie Crowe--one of the shape-shifting Others--discovers a murdered man, Vicki finds trouble instead. The detectives want to pin the death on her, despite the evidence that nothing human could have killed the victim. As Vicki and her friends search for answers, ancient forces are roused by the disturbance in their domain. They have rules that must not be broken--and all the destructive powers of nature at their command.

I was very excited to find that Anne Bishop has written a new book in the World of the Others, entitled Lake Silence. It was an auto-buy for me, life stopped while I binge-read it (much to the disgust of my rather spoiled cat) and now I can’t wait to share it with you too.

If you haven’t read the first five book series, this is a standalone novel, explaining the world building as we go. The books are set in a world where Earth is Namid and humans are far from being the dominant species. The Others who rule the world refer to them as clever meat and set pretty strict limits on where humans can go and what they can do. Shapeshifters, vampires and other deadly members of the Others, or terra indigene, form a buffer between the humans and the vastly more terrifying varieties of Elders and Elementals. As one character tells another in the previous series, “The Others are what happened to the dinosaurs.” They’ve been around a long time, they’re not going to take any nonsense from the upstart humans but some of them do find certain human inventions useful. For their part, many of the humans consistently forget or deny what the Others can do, even when in the midst of Other territory.

It’s a fascinating construct and I’ve barely scratched the surface of everything author Bishop smoothly includes in her worldbuilding.

Heroine’s Train Wreck of a divorce:

The events in Lake Silence take place after the so-called Great Predation which occurred in the previous series as a result of serious missteps and open warfare on the terra indigene by certain human groups. Vicki DeVine, the heroine of this novel, is a human who received a rural inn named the Tumble from her despicable ex-husband as a divorce settlement. She’s trying to make a go of the place and attract human guests while navigating the intricacies of dealing directly with shifters ranging from Crows to Cougars, and the Sanguinati vampires in charge of the town. Vicki is also struggling with serious post-traumatic stress from the years with her abusive husband. As one character says early in the book, “She had a train wreck of a marriage and a car wreck of a divorce, and there are some deep wounds that haven’t healed yet.”

Then Aggie, her Crow shifter guest, brings an eyeball into the kitchen to microwave it and informs Vicki there’s a dead body in the woods. She, quite naturally, calls the police, kicking off the events of novel. I liked Vicki, who gains strength as the book proceeds, and her “brain to mouth disconnects” as she terms them, can be quite hilarious. There’s Wayne Grimshaw, the tough highway patrol officer who’s the first responder to her call, Julian Farrow, the Intuit owner of the ‘Lettuce Read’ bookstore (named for him by The Others, who are shaky on spelling), Ineke who owns the other inn in town and is a staunch supporter for Vicki…not to mention Ilya Sanguinati, her very impressive, self appointed vampire lawyer.

Turns out there’s a lot more going on than anyone realizes, from the reason the Tumble was created in the first place so many years ago, to why her ex-husband allowed Vicki to own the place, to a sinister secret society that could get a lot of humans killed as they repeat mistakes made before. The Others have limited patience for human schemes.

The remote town of Sproinger itself contains some mysteries. Named after the cute ‘happy face’, rabbitlike terra indigene found only there and nowhere else in the world, the town is struggling to survive after many humans were killed or abandoned life in the rural ‘wild country’ after the Great Predation.

Book stores, board games and the Lady of the Lake also figure in the story…

I loved this book and have now reread it several times. The fate of the Tumble and Vicki herself are revealed through many unfolding developments. There’s no romance, although there are hints of what might happen along those lines going forward. The romance in The Others series also developed as a satisfying slow burn so I can be patient. I really hope this is going to be the first book in a new series because I crave more.