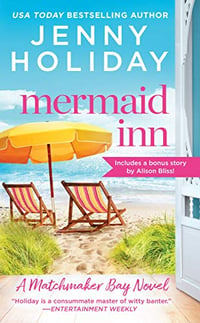 First off, you should know that I didn't finish Mermaid Inn. As far as I know, it's not a bad book. It just didn't work for me. If you want to know why, here are far too many words on the topic.

Mermaid Inn is the first in a new series about a quirky small town in Canada, Matchmaker Bay. As with most first-in-series novels, there's a lot of heavy lifting involved in building this setting and introducing characters and places. Sometimes this is clunky, but Jenny Holiday did a decent job. She had a short video in her Instagram stories about why she wrote a small town and mentioned the second-chance trope, which is apparently her least favorite. Since the story will be magically gone by the time you read this, here's the summary: Matchmaker Bay is a fictional blend of a few different small towns in Holiday's life. She wanted to write about how small towns are affected by suburban creep, urban sprawl, whatever you wish to call it. How towns on the periphery change as cities grow. All of this is fairly standard and expected.

The setup itself is very tropey. Eve's aunt, with whom she spent summers as a child and teen but hasn't kept up with much in a decade, passes away before the book starts and leaves her inn to Eve. Eve reluctantly returns to Matchmaker Bay for just long enough to go through her aunt's belongings and sell the inn... or so she thinks. There's a clause in the will stating that she can't sell it for a full year. Then there's the love of her life, her ex-boyfriend Sawyer.

Sawyer did the classic "she won't achieve her dreams if she stays here so I must cheat on her in public to push her away" thing. I hate this. Sawyer and I were not friends. I want nothing to do with my exes, so this is already one of my least-favorite tropes, but I was banking on my love for Holiday's previous books and my knowledge that she also doesn't like the trope. Surely, Holiday would have subverted it somehow? Nope.

Still, I pushed on. By 30%, however, I had no idea how these two would function together. There's a scene where she's stuck on the roof, trying to figure out why it's raining INSIDE. Officer Ex-Boyfriend has to save her. Then he has to save her again when she and a friend drunkenly lock themselves inside a flower shop. I understand that you need to force the characters together, but she already doesn't want to see him, dreads his very presence... why does she have to also be publicly humiliated? I'm sure that later on the two of them interact in some sort of real way, but I was bored at this point.

The nail in the proverbial coffin, however, was the repeated flashbacks. Eve's relationships with her aunt, Sawyer and the town itself are revealed through flashbacks that disrupted the story and didn't elicit enough emotion for me to want to push through them. She walks through the inn, picking up items and recalling where they came from and why they're important to her and her aunt. She touches something that reminds her of Sawyer and recalls seeing him bruised following yet another altercation with his abusive father. I wanted Eve to be living her present life, not to read about a second chance relationship with her aunt, her ex-boyfriend and the beloved town of her childhood.

By the time I set the book down, I didn't have a sense of who Eve or Sawyer were and why I should want them to be together. I just wanted Eve to leave. And she wasn't going to do that, so I left instead.

All this to say that I wanted to like the book and didn't. I suspect a large portion of my reading friends will love it, but it's not for me. If you like small towns, second-chance romance, police chief heroes or librarian heroines who don't do any actual librarian-ing on page? Might be the book for you.

If you want a copy for yourself, here's an Amazon affiliate link.

Incomplete Content Warnings: past: child abuse, death of a relative, past: cheating (just kissing, I think)